I love the Nintendo 64 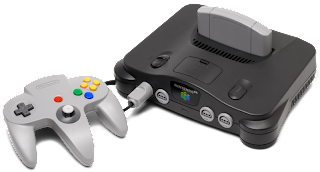 With their Super Nintendo Entertainment System (SNES), Nintendo was sitting on the top of the home console market. They had rebuilt it with the NES and now completely dominated it worldwide. Anticipation was high for their follow-up, originally dubbed "Project Reality" and then Ultra 64, before finally coming to market as the Nintendo 64.

While a lot of people were anticipating a hard battle between the N64 and Sega's new Saturn console, pretty much nobody saw Sony's PlayStation coming. It blitzed and overwhelmed the market, massively expanding the videogame user base and dominating videogaming hardware for the next decade. While the Nintendo 64 did okay sales wise, it was a harsh knockback for a company that must have felt it could do no wrong.

In the end almost 33 million consoles were sold, streets ahead of the Saturn's 9.5 million consoles but ridiculously far behind Sony's stratospheric 102 million. I absolutely adored it: the N64 was graced with some of the best videogames of all time, including at least two games with a strong argument to be the number #1 greatest game of all time. This was the last non-handheld Nintendo console I was really engaged with: I purchased a Gamecube and a Wii, but never really played either console that regularly. I was addicted to the N64, and played several of its games to death. 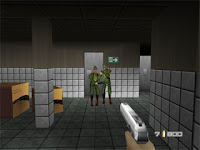 Animal Crossing
The Nintendo 64 saw the first of several versions of this game, later released for the Nintendo DS, Gamecube and Wii. It's a delightful, lazy sort of game based around collecting objects and talking to anthropomorphic animals. There's little at stake, and it made the perfect game to unwind with in the evening after work. That Tom Nook though - I'd keep an eye on him. Dodgy.

Goldeneye 007
Prior to Goldeneye 007 there were two very reliable maxims about videogames. Firstly, it was impossible for a first-person shooter to successfully work on a console. Secondly, no great videogame ever came out of a licensed title. Goldeneye shattered both preconceptions with a tight, engaging shooter based on James Bond with a strong solo campaign and gleefully entertaining multiplayer maps. 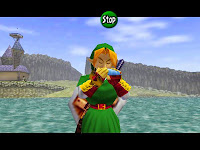 The Legend of Zelda: Ocarina of Time
It would be damn-near impossible to identify the greatest videogame of all time, but I personally think Ocarina of Time is one of the four or five best contenders for that title (another is further down this list). It takes all of the elements of Nintendo's Legend of Zelda franchise and transforms it into a sprawling, immersive and utterly charming world. In this game, exploring the various dungeons and environments is just as satisfying as defeating the monsters within them.

The Legend of Zelda: Majora's Mask
Majora's Mask isn't the pinnacle of videogaming that its predecessor was, but what it does do is take all of the ingredients of Ocarina of Time and graft them onto a darker, more complex story. The result is something that feels very clever, but doesn't quite match the exhilaration that Ocarina managed to generate. 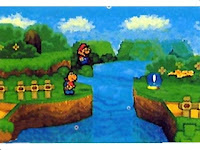 Paper Mario
Nintendo's follow-up to their SNES title Super Mario RPG is lower on the traditional RPG mechanics, but much higher on charm and looks. The pop-up book aesthetic has been re-used by Nintendo in a number of Paper Mario titles over the years, but none of them made as much of an impact as this one.

Perfect Dark
An unofficial sequel to Goldeneye 007, stripped of the 007 license but granted with superior level design and a broad range of highly entertaining weapons. Its developer (Rare) tried to relaunch this as a franchise on the Xbox 360, but no one bit.

Snowboard Kids 2
I ummed and ahhed about this one, but in the end I had to go with my gut. This game is here because it copies a lot of the elements of Mario Kart 64, but unlike that title it doesn't obviously cheat. Both games are great, and allow for fast-paced, colourful racing action, but where Mario Kart 64 would allow computer controlled players to obviously catch up if the player was playing too well, Snowboard Kids 2 either didn't do that or did a much better job of hiding it. The snowboarding motif also gives this game a nice sense of originality that its mechanic lacks.

Super Mario 64
This is the other contender for Best Videogame of All Time. A lot of gaming franchises made the leap from 2D to 3D environments, but none of them made it with such a level of skill and finesse as this: the best iteration of the world's best platforming francise. It's jaw-dropping how instinctive this game is. You can pick it up and play it from the get-go. Rather tellingly, no 3D platformer has managed to be this instinctive and easy to play ever since.

Super Smash Bros
Nintendo finally made their own fighting game (via a second-party developer), and they produced one in typical Nintendo style - less overtly violent, utterly charming and structured in such a way that four people could fight at the same time and still manage to work out what was going on. Seeing all of Nintendo's various characters fight it out on screen was a Nintendo nerd's dream come true.

Space Station Silicon Valley
I'm pretty sure this is the only third-party title on the list (that is, a game not developed by either Nintendo themselves, or a partially-owned subsidiary developer). It's probably the most obscure game on the list. It didn't set the world on fire in terms of sales. Nonetheless it's an exceptional videogame.
Posted by Grant at 8:52 AM