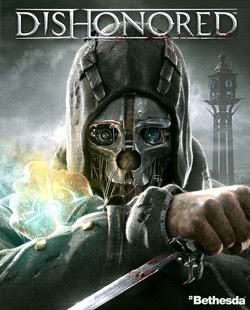 In the plague-riddled city of Dunwall, a disgraced bodyguard named Corvo - framed from the assassination of the Empress - joins a secret resistance group. One by one he will eliminate those responsible for the deadly coup d'etat and place the dead Empress' daughter onto the throne.

Dishonored is a stealth-based action game, played from a first-person perspective. One of the game's biggest hooks is its versatility: each level is a self-contained sandbox, with multiple solutions available to each of the game's tasks. Take the front door? Maybe sneak in through an open window? Find a way in through the sewers? User magical powers to possess a fish and swim inside through the drainage system? Many options are available, and it's up to the player to decide which will be the easiest or most satisfying.

It is apparently possible to complete the game without killing a single character: I wouldn't know, as I'm dreadful at videogames and racked up an unintended bodycount like nobody's business.


In some ways Dishonored is reminiscent of the classic stealth game Thief and its sequels: both are first-person action games based around sneaking through early industrial landscapes. The difference is that the Thief games were riddled with dark corners and shadows, whereas Dishonored is not. It takes a while to get used to a stealth game where you actually need to be stealthy. Waiting around corners and in the shadows doesn't necessarily cut it. The ability to teleport oneself several metres at a time is an ability that can be gained quite into the game, and for the stealth-lacking player such as myself it's an absolute godsend.

There's a lot of wonderful world-building going on in this game, particularly in terms of its 19th century heavy industry aesthetic. Dishonored skirts the steampunk aesthetic without entirely embracing it: this city is far too dirty, plague-ridden and unhappy to fit perfectly into steampunk's streamlined, depoliticised tropes.

Corvo himself is a typical videogame protagonist: silent, faceless, and - as the game is played in the first person - by-and-large invisible to the player. While this certainly allows the player to engage more fully in the game as an experience, I always find the lack of a visible protagonist makes it difficult to engage with a game as a story. The game is remarkably short as well, comprising just nine missions. It does have extensive re-play value, however, as it is impossible to gain all of the psychic and magical powers available to Corvo in one play-through. I've completed the game once with a fairly high death toll (although I admittedly improved as the game progressed), and would be interested in attempting the fabled "zero body count" play-through.

Good without being great, and inventive without being groundbreaking, Dishonored is a perfectly playable game to squeeze in between the latest instalments of whatever "can't miss" franchises you most enjoy. As with a lot of games based on new IP, I can see a lot of potential for an improved, more complex sequel.
Posted by Grant at 7:36 PM