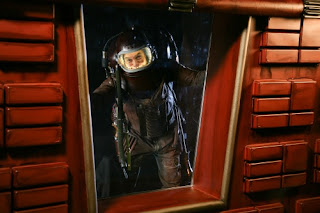 In Red Dwarf X's fourth episode, Lister loses Starbug and Rimmer in a game of poker, resulting in his being fitted with a explosive device to his groin. Meanwhile Kryten and the Cat become quantum entagled with each other and start saying everything in unison with each other.

Well it had to end sooner or later. Red Dwarf's unexpected winning streak of genuinely funny episodes comes to a crashing halt with "Entangled", an episode reminiscent of the tedious episodes around the sixth and seventh seasons - replete with strange ugly mutant people, overplayed gags and fairly shoddy writing. It's not completely devoid of humour, but quality jokes are thin on the ground this episode.

In the end it boils down to a question of quality versus valuable time. Is this episode of sufficient quality to warrant your valuable time? In this case I'd have to say no.

It's all just so eye-rollingly tedious. I'm a big fan of Red Dwarf when it bases its humour on character. In fact, I'd go so far as to say all genuinely good comedy (indeed all good fiction) is based on character. What we have here is humour based on science fiction concepts, and that's never as funny. Look back over the history of this series as an example: it's never as funny. Some people may find this episode hilarious, with jokes based around quantum entanglement and scientific research and mutants who eat garbage. It made me wish I was a mutant that ate garbage, since it might have made the whole thing more palatable.

My personal taste may be blinding me to this episode. I think at the end of the day there are two types of Red Dwarf fan: those who like it as a comedy series that happens to be set on a spaceship, and those who like it as a science fiction series that happens to be a comedy. I'm firmly in the former camp - those in the latter may find this episode more worthwhile than I did.

Even with one bad episode, however, we're still running at three good episodes out of four: a running tally of 75%.
Posted by Grant at 8:53 AM