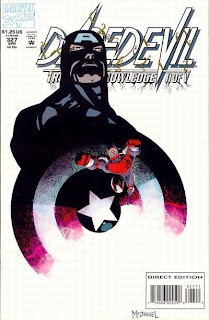 It's 1994. Everybody has learned that blind lawyer Matt Murdock is also the New York vigilante Daredevil, but that's okay because they just buried Matt Murdock's corpse in the cemetery. Except not really: they buried someone else, because Matt is running around undercover now disguised as a replacement Daredevil in a slightly different costume. You'd think this was a terrible disguise, but surprisingly it works like a charm. I always figured Steve Rogers to be a pretty smart guy, but even he doesn't recognise Matt when they meet.

Both Captain America and Daredevil is on the trail of a gang of dangerous computer hackers-turned-supervillains known as System Crash. They all have hilarious super-villain names like Cobol Charlie and Sinclair Spectrum. To be honest, it's all pretty appalling stuff but it's also inexplicably appealing stuff too.

This issue is written by D.G. Chichester with art by Scott McDaniel. Chichester is clearly a fan of cyberpunk: this issue opens with a quote by Marshall McLuhan, the last with one by Bruce Sterling. Of course it's a 1994 comic, which means a Lawnmower Man-style of hilariously inaccurate depictions of computers, technology and cyberspace. It's all in good fun though: it's hard to dislike this issue too much, because it's just a bit too goofy.

Scott McDaniel's art is weirdly exaggerated and a bit hard to follow, which is a problem McDaniel carries with his for his whole career (most recently in Static Shock). It's distinctive, and I want to like it more than I do, but the work loses something in terms of clarity. His cover is A-grade, however: stylish, moody and brilliantly composed.

As an added bonus, this issue's letter column features a letter from young Christos Cage. When he's older he'll write comics for Marvel himself.
Posted by Grant at 9:03 AM