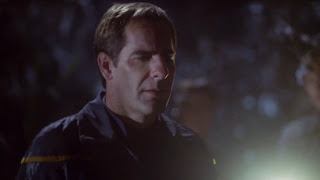 The Enterprise stumbles upon a rogue planet in deep space, where a trio of alien hunters have arrived to track down and ritually slaughter the local wildlife. There's something else on the planet with them, however, as Archer continues to see a mysterious woman deep within the jungle.

This is, to be direct, exactly the kind of Star Trek episode that ultimately got the franchise killed in the ratings. The Enterprise comes across a mysterious planet. They meet some aliens who look exactly like humans except for bumpy growths on their faces. There's a mystery and a bit of action. Everything gets resolved and the Enterprise flies on. It's Star Trek by the numbers: utterly unengaging and inoffensive, and eminently missable.

It's an episode where I find myself straining to say anything interesting about it. The three Eska hunters are played by actors with interesting CVs for sci-fi fans. Conor O'Farrell played Jim McDivitt in From the Earth to the Moon and starred opposite Kevin Bacon in Stir of Echoes. Eric Pierpoint played Detective George Francisco in the TV series Alien Nation. Keith Szarabajka played the villain Holtz in Angel and had a notable supporting role in Christopher Nolan's The Dark Knight.

The entire sequence of Archer seeing a mysterious woman in the jungle who then just as mysteriously vanishes into thin air is ripe and tedious, and makes the character look like an idiot. And while we're talking about things tedious and idiotic, how can there possibly be complex planet and animal life on a planet in deep space light years away from the nearest star?

This is an episode you can freely miss. I would have, had I not promised myself to watch and review the entire series. 10 good episodes out of 17, or a hit rate of 59% for the season so far.
Posted by Grant at 11:55 PM