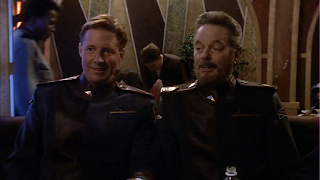 The arrival of an Earthforce Explorer class starship at Babylon 5 leads Sheridan to question the wisdom of commanding a space station - but when the starship then goes missing in hyperspace, he has to use all of his abilities to find and rescue the vessel before it is lost forever.

"A Distant Star" is written by D.C. Fontana, which gave me hope because she wrote some of the best episodes of Season 1. Sadly this script is nowhere near as accomplished, and seems to rely on obvious plot developments and cliches to win the day. I know I'm only four episodes in, but I'm finding myself surprised by Season 2: I remember it being a significant step up in quality from Season 1, but so far I haven't actually been able to discern a difference - other than the opening credits aren't as snappy and the brighter lighting continues to make everything look cheaper.

The EAS Cortez is an unintentionally hilarious starship, because every time it appears on screen it is accompanied by the most hackneyed heroic fanfare that composer Christopher Franke could assemble. The first time it feels like a cliche. The second time in unintentionally amusing. Every appearance of the ship beyond the fourth shot had me rolling in stitches.

Russ Tamblyn plays Captain Jack Maynard, commanding officer of the Cortez and old friend of John Sheridan's. Cult TV fans will probably recognise him as Dr Jacoby from David Lynch's Twin Peaks. He's an oddly jolly, laid-back sort of Captain. I've been finding Sheridan weirdly jovial for a commanding officer, but Maynard leaves him for dead. I get the impression that the Cortez is a party ship. They probably do a little dance every time Franke's ridiculously fanfare pipes up.

Maynard's purpose in the script is to ask Sheridan why he's commanding a space station and not a starship, which leads to some fairly two-dimensional angst on Sheridan's part: should he stay or should he go? If he's going to be stuck with dialogue like this episode's for the next four seasons, I vote he goes to the rim for safety.

Before long the Cortez gets lost in hyperspace, and Babylon 5's crew have to find a way of locating the ship and leading it back to the nearest jumpgate. This is one aspect of the episode I really quite liked: hyperspace turns out to be a very dangerous place, with starships tethered to jumpgates to traverse from one system to the next.

The day is saved by Lieutenant Keffer, everybody's favourite best friend who still hasn't been properly introduced into the series but just happens to be drinking buddies with the entire command team. I get that the character was forced on the production by the TNT network, and I fully appreciate that J. Michael Straczynski resented his presence on the show. It would have been, I don't know... what's the word? That's right: professional. It would have been the professional thing to do to actually give a damn about the character while he's in the series. As it stands he's a one-dimensional cipher and an absolute waste of space, and it's not because he was forced on the series. He's a badly written character because he's badly written. He's a visible act of self-sabotage that strikes me as immensely petty at best on behalf of Babylon 5's creator and executive producer.

As part of the climax we get our first genuinely good look at a Shadow starship, as it randomly passes by in hyperspace. This is a great addition to the slow-burning introduction of the Shadows to the series: the ship is huge, weird-looking and silent. It doesn't interact with Keffer or the Cortez at all. We don't even get to know if it even noticed the Earthforce ships were there.

Finally, there's a humorous subplot regarding Dr Franklin trying to put Garibaldi on a diet and Garibaldi trying to sneak behind his back and eat some bagna cauda. This subplot gives the entire episode a very old-fashioned, 1980s feel: it has two distinct and separate plots, one deadly serious and the other outwardly comedic. Even by the mid-1990s the two would have been meshed together better and given a consistency of tone. Even considered in isolation the bagna cauda storyline is tedious and unfunny, and makes me wonder if Fontana simply ate some herself before plotting this script.

This is a poor episode, the second out of four for the season so far. That leaves Season 2 running at 50% worthwhile, compared to 45% overall for Season 1. I suppose that does make Season 2 better - but only barely.
Posted by Grant at 1:25 PM