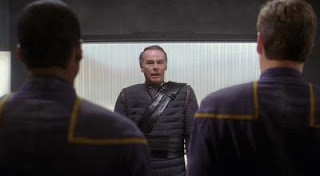 Archer and Mayweather wake up in a Tandaran internment camp after encroaching on military space. At first it seems as if their stay will be short - three days in prison, a meeting with a magistrate, then freedom - but when Archer discovers that the camp's Suliban population are being held without cause or charge, and when the overseer Colonel Grat learns of Archer's previous contact with the Suliban Cabal, Archer and Mayweather's stay may just be a little longer.

In the role of Colonel Grat is Dean Stockwell, a veteran actor of American film and television. Contemporary audiences still probably remember him best for his five season run on the science fiction drama Quantum Leap, which starred Scott Bakula (Captain Archer). This is then the episode of Enterprise that I think every science fiction fan knew was coming: an unofficial Quantum Leap reunion inside the Star Trek universe.

I can't help but like that. Bakula and Stockwell had great chemistry on Quantum Leap, and while their roles are both very different in "Detained" they get to collaborate on a string of strong dialogue-based scenes. Colonel Grat is the best kind of antagonist - the one who honestly believes he's doing the right thing. His civilization can't tell the difference between the Suliban Cabal and ordinary Sulibans, so for the protection of the innocent ones he's had them locked up. It makes an insane, diabolical sort of sense, and deliberately references Japanese-American internment camps during World War II.

Internment camps are a slightly weird thing for Enterprise to spend a week allegorising. Back in the 1960s, Star Trek presented allegories on all sorts of contemporary issues: racism, the Vietnam War, the Cold War, and so on. Enterprise tells us internment camps are a bad thing, which is true, but it's something I think we all worked out about 60 years ago when this was a relevant issue. It's a pity that this episode was broadcast in April 2002 - had they done this story by Season 4, there would be a truckload of uncomfortable and contemporary comparisons they could draw with the US occupation of Iraq.

Far better is Mayweather's experience confronting his own racism against the Suliban - all he's met are the Cabal, and it takes him much of the episode to resolve the idea that not all Suliban are bad guys. It's the best material they've given poor Anthony Montgomery since that episode where he built a snowman on a comet. Poor Anthony Montgomery - he's the Wil Wheaton of Enterprise, perfectly capable of being involved in the story but constantly left with as good as nothing to do. At least in this episode they're not harping on about his past as a deep space freight hauler.

Issues of allegorical relevance aside, "Detained" is a solid, well-scripted, tight little episode. It's enjoyable and doesn't outstay its welcome. Plus there's the Quantum Leap reunion. Colonel Grat is a great character, and he seems to have a strong interest in the Suliban Cabal and the Temporal Cold War. I hope this means we get to encounter him again. (And I just checked, and we don't - someone missed a trick there, Enterprise writing team.) 20 episodes in, 12 of them good: that gives us a cumulative watchability score of 60%. Things are looking up again.
Posted by Grant at 9:52 AM