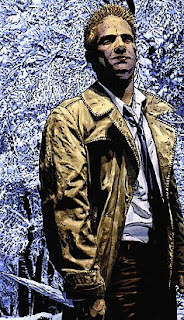 Yesterday DC Comics confirmed what many in the industry had long suspected: that Hellblazer, currently the longest-running uninterrupted comic book running at either DC or Marvel, will end with its 300th issue in February. The comic has been written by Peter Milligan since its 251st issue some years ago. It will be replaced with a non-mature readers title, Constantine, within the DC Universe New 52 range.

The cancellation of Hellblazer is not a great surprise: sales have not been strong in recent years, and as a continuing title it lacks the ability to be easily collected and sold in trades like The Sandman, 100 Bullets, Preacher or other popular DC Vertigo titles. That it coincides with the announcement of a DC Universe relaunch of its protagonist, John Constantine, is unfortunate. It feels like Constantine used to be about stories, but now he's just a commodity. DC Vertigo used to be the place to go for great comic book works of science fiction, fantasy and horror. Today I feel a better place to look is Image Comics.

John Constantine joining the Justice League and Image being the place for progressive, intelligent genre titles. Who'd have picked that out 10 years ago?

As the bulk of my comic book shipment appears to be stuck in Australian customs, I'm running through this week's Pull List in two sections: stuff I have now and stuff I will hopefully get by the end of this week. So in Part 1, you can find reviews of Deadpool, Green Lantern, Iron Man and Manhattan Projects.

Oh Deadpool. A shitty Deathstroke rip-off that got turned into a hilarious superhero parody that got turned into a sales bonanza for Marvel. He's one of those characters whose appeal lies entirely in how he's being written, and who is too easily overexposed by publishing too many titles with him in it. He's like Batman and Wolverine, only less popular and potentially more irritating. This relaunch is actually quite funny, however, with Deadpool getting hired on the down-low by SHIELD to take care of a zombie ex-President problem (after the media reports on Captain America decapitating Harry Truman). I'm not sure I'll be back for a second issue, but I was reasonably entertained by the first. Tony Moore's art is great. (3/5)

While Hal Jordan and Sinestro remained trapped... somewhere (I haven't read issues 7-12 of this comic, it sometimes gets confusing), new Green Lantern Simon Baz is confronted by the entire Justice League. I'm liking Simon a lot. I like my Green Lanterns flawed and interesting, which is why I've always been a Kyle Rayner supporter and a Hal Jordan hater. Hopefully Simon gets to hang around beyond this current "Rise of the Third Army" story arc. There's not a lot of self-contained story here, but it's a clear enough read without having to rely on the other Lantern titles in the crossover to understand what's going on. Except for Hal and Sinestro: where the hell are they? (3/5)

Iron Man is also getting a relaunch this week, in the capable hands of writer Kieron Gillen. I'm a big fan of Gillen's comic writing, and he doesn't disappoint here with a neat hook and great dialogue. It's not surprising to see Tony Stark getting so much of his personality from Robert Downey Jr's screen portrayal - how far we've come since Mark Millar was making jokes at Downey Jr's expense in the pages of The Ultimates. Here Tony sets off to contain the potentially deadly "extremis" technology following the murder of its creator. This is a great opening instalment, and - as I suspect Marvel hopes - the perfect jumping-on point for people looking to get into Iron Man for a while. Unfortunately the book is saddled down by typically stiff and photo-referenced (or at least it looks like it) art by Greg Land. I'm not a fan of his work, and it does dampen my enthusiasm for this relaunch somewhat. (3/5)

Manhattan Projects has been a wonderfully imaginative read for its first six issues, but it's here with the seventh that the plot actually gets a clear direction. I won't spoil what it is, but it promises an exceptional future for this comic. By launching the comic's broader direction, issue #7 doesn't have quite the same impact as the previous self-contained stories, but this remains one of the most intriguing and stylishly presented comic book on the market. Special mention has to go to Pitarra's hilarious splash page depiction of what President Truman (his second appearance in comics this week) does in his spare time. (4/5)

The winner and loser of the week will get nominated once I've read the remainder of this week's titles, including Action Comics, Detective Comics, Worlds' Finest and more.
Posted by Grant at 9:58 AM