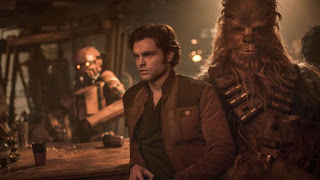 A review of Star Trek: The Next Generation's penultimate episode "Preemptive Strike" was the most-read post on The Angriest last month. Other popular posts included a review of the first hour playing Kirby's Epic Yarn on the Nintendo Wii, and a bunch of comic book reviews. Over at FictionMachine, the most popular new reviews were for Solo: A Star Wars Story, Deadpool 2, and a feature essay on Tomorrow Never Dies.

All up, May 2018's activities involved one film essay, eight reviews of new or festival films, six reviews of older films, four TV reviews, one videogame review, and short reviews of 40 comic books. A full index of May's posts is included below.