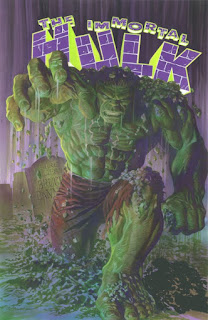 Back in Marvel's crossover event Civil War II, Bruce Banner (aka the Incredible Hulk) died. Now he's back. How? Quite simply, he's the Hulk - and the Hulk is too powerful to die.

The Immortal Hulk brings back the original and best Hulk (apologies to recent stand-in Amadeus Cho) with a fresh coat of paint and a deliberate skew from superhero adventure to comic book horror. Writer Al Ewing takes what is - let's face it - a pretty lazy reason to bring the Hulk back, and transforms it into something genuinely horrible. When we first see Banner, he's about two pages away from a fatal gunshot wound to the head. No matter how many times that happens, however, night will fall, his body will rise and the Hulk will emerge. It's a nicely bleak set-up for this new volume.

Joe Bennett and Ruy Jose give the book a nice aesthetic, giving everything a slightly old-fashioned edge. Bennett's art comes into its own in one climactic moment - you'll know it when you turn the page. Between this and Doctor Strange's current sojourn into space, it seems Marvel is playing with fresh and innovative angles on its long-running characters. Hopefully they're successful enough to allow these new set-ups to play out in full. (4/5)

Under the cut: reviews of Exit Stage Left: The Snagglepuss Chronicles, Giant Days, and The Man of Steel.

After last issue's climactic showdown in front of Joseph McCarthy's anti-communist witch hunt, this final issue of The Snagglepuss Chronicles jumps forward five years to 1959. It's a gracefully written epilogue, one that plays out the exits for the cast one by one in an elegant fashion before wrapping everything up in a way that's both fitting and rather silly. This has been a deeply weird miniseries. The concept was ridiculous, but the execution somehow made it all work. It's going to linger in the memory for all sorts of reasons. (4/5)

Well into their final year of university, the Giant Days gang head off for a careers expo. Daisy over-achieves, much to her concern, while Esther struggles to fit into corporate culture. It's still taking a little while to get used to Julia Madrigal's aesthetic, which differs just enough from her predecessors to be a distraction. Last issue that was papered over by a solid script; for some reason this time around the writing doesn't spark off the page like it usually does. It's a reasonable issue, but ultimately a rather ordinary one. (3/5)

There are too many artists in this issue. With the story split up between Shaner, Rude, and Fabok, there is a distracting lack of visual consistency that detracts from the story. There is also not enough plot. Sure, things happen. Characters appear, Lois and Jon's absence gets hinted at and foreshadowed in flashbacks, but by the end of the issue nothing feels any further along than at the end of the last. On a scene-to-scene basis there's good stuff here. As an actual ongoing narrative, it's much too slow - a hallmark of Bendis' writing. (3/5)
Posted by Grant at 6:11 PM