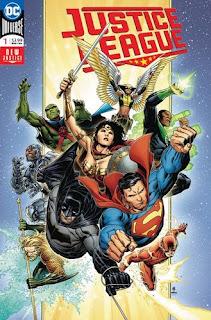 Scott Snyder kicks off a new ongoing DC series with Justice League, following on from the events of Dark Nights: Metal and No Justice, and truth be told it's pretty amazing.

I'm not sure if you were reading comics about 20 years ago when Grant Morrison and Howard Porter took over the Justice League comic book. It was relaunched as JLA with an all-star roster of heroes, and a deliberately big picture scope and 'widescreen' presentation. That's exactly what it feels like we're getting here: big-screen JLA all over again. The book puts the Martian Manhunter back at the centre of the League where he belongs, and surrounds him with the heroes you would expect to see. For enemies Snyder brings in the famous villains, and he ties it all together with a big apocalyptic and deeply ominous opening chapter. If the point of a first issue is to get readers to buy the second, then this is an unqualified success.

Jim Cheung and Mark Morales' artwork is excellent, and just distinctive enough from the current style of superhero comic to make a strong impact. With luck they will stick around to make as definitive a run here as Snyder managed with Capullo and Miki on Batman. Tomeu Morey's colours are wonderfully warm and nuanced. You couldn't want for a better-looking Justice League. (5/5)

An assignment to guard a prison transfer for Superman villain the Parasite goes predictably haywire, leaving Green Arrow to fight his way out. This new storyline by Mairghread Scott is straight-up old-school superhero stuff, with a lot of action and smart-alec dialogue. Scott also uses a lot of narration as well, which can be a risk but which works well here. This is the kind of superhero book you could hand to a brand-new reader, as it effectively works as an introduction to Green Arrow at the same time. It's nice to see that: Stan Lee once noted that every comic book is somebodys first. It's cool to see Scott write accordingly. (4/5)


Image. Written by Brenden Fletcher and Karl Kershl. Art and colours by Karl Kerschl and Msassyk.

Three issues in, and while the actual context of what is going on remains elusive, the story and art continues to impress enormously. There isn't a better-looking comic book on the shelves at the moment, and while quite why a fantasy queen has been transformed into a tiger and why a young ex-soldier is accompanying her remains unknown, it all just flows beautifully off the page. Assuming the story pays off soon, this is going to be one of the best comic books of the year. (4/5)

Vep gets one final chance to prove herself before sent to labour duty. The strangeness of Sloane Leong's story, and the deliberately vague and surreal universe she has created, really feel like some of the weirder French science fiction bandes dessinees out there - although its a similarity in tone and feel rather than anything superficial. Visually this book continues to have what is arguably sub-standard artwork saved by immensely vivid and eye-catching colouring. It's great to see such a powerful imagination at work, and it's the unbridled creativity that's making this book so weirdly addictive. (4/5)

Brian Wood is back with another viking adventure. It's clearly an area of some passion to him. This one follows a non-verbal daughter and her father - recently awoken from a long coma and heading on a mission of revenge. It's nicely illustrated by Mack Chater, but has two key drawbacks: do we need another Brian Wood viking adventure, and is it really good value. There's 28 pages of story here, but there's also a US$4.99 price tag attached. Given we've seen these stories from Wood a couple of times already, it's not clear yet if this is worth a premium cost. Technically it's slightly better value, but it's still a big hit per month. (3/5)

DC's somewhat disastrous range of follow-ups to Dark Nights: Metal continues with this head-scratcher of a reboot. The Unexpected was a DC anthology series of science fiction and weird fantasy that kicked off in 1968. This seemingly unrelated reboot follows Firebrand - yet another version - as she becomes involved in a magical-demonic quest involving multiple planets and a Doctor Strange analogue named Neon. There's a lot of action in this first issue, but not a lot of explanation - and that's somewhat maddening. This book will be lucky to last a year. (2/5)

Elida Al-Feyr trades junk on a space station city. She's also the daughter of a queen - one that may have been found at last for Elida to go and rescue. This is pure and simple space opera. There's a lightness to the banter between Elida and her sidekick Isaac, there's action and shoot-outs to be had, and it's all wrapped up in nicely distinctive artwork by Jason Smith. Harry Saxon's colours are nicely reminiscent of Copperhead, another great science fiction comic. Comic from an indie publisher like Vault, you're probably going to have to buy this digitally or order it in to your local comic shop, but it's worth it. This is promising stuff. (4/5)
Posted by Grant at 11:21 AM