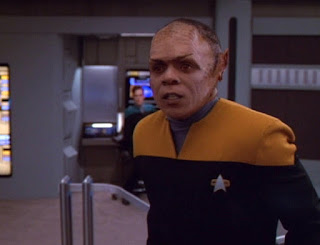 A transporter accident sees Lt Tuvok (Tim Russ) and Neelix (Ethan Phillips) fused into one gestalt identity: a humanoid created from the fused dna of both men who elects to call himself Tuvix (Tom Wright). As the crew scramble to find a way of separating Tuvix back out into two people, Tuvix begins to immerse himself in his new life on Voyager.

What a hell of a rollercoaster this was. It begins with a terrible and rather tacky premise: the accident creating a 50/50 blend of Tuvok and Neelix, presenting aspects of both men in a very overt and two-dimensional fashion. It then evolves into a surprisingly sensitive and well thought-out drama about adjusting to loss and change. After that, it all wraps up with Captain Janeway (Kate Mulgrew) committing a pre-meditated homicide with almost the entire crew sitting back acting as accessories to crime. From then, I suppose the audience is simply expected to move on without ever dwelling on the fact that the star of the show is an unrepentant murderer.

If this was Blake's 7, you would applaud it: Avon acted as an amoral bastard once again. This, however, is Star Trek: Voyager, and the series clearly expects its protagonists to be noble, ethical and driven by strong moral values. When presented with the opportunity to be split back into two people, Tuvix declines. He is sympathetic to the crew's loss. He understands their desire to save their friends. At the same time, bringing back Tuvok and Neelix means Tuvix ceasing to exist. He points out that this is murder. He expresses the clear and firm resolve not to die. Janeway uses security personnel to force him to sickbay. The Doctor (Robert Picardo) point-blank refuses to assist, so Janeway injects Tuvix with the necessary isotope herself, activates the transporter and kills him. The episode ends there.

This is genuinely series-wrecking territory, since there are no consequences of any kind for this murder. The Doctor aside, the crew simply stands awkwardly and lets it happen. When Tuvok and Neelix materialise into view - presumably with Tuvix's memories intact - no space is given for them to express remorse, or the challenge the Captain on killing their joint self. The episode simply ends with Janeway walking out of the sickbay looking sad. Not only does Tuvix get murdered by the characters, he isn't even given room to properly express his fear and rage by the writers.

How do you continue watching Voyager after this? The Captain has lost all moral authority. Her crew stood by and did nothing. The relationship between Janeway and the Doctor should be fractured beyond repair. How can she possibly look Neelix or Tuvok in the eye, with all three knowing exactly what she did and what it felt like? The way you go on is by ignoring this episode and pretending it never happened.

This is arguably the worst episode of Star Trek ever produced. Others had sillier storylines, or worse dialogue, or terrible performances. This one makes its characters stone-cold killers, and then expects the audience to simply roll with it and move on. In all honesty I never quite liked Voyager as much from this point onwards. I haven't even seen much of its last three seasons. Why bother? Who cares whether or not the characters get home if they're getting away with murder along the way?

With 14 good episodes out of 24, the quality ratio drops to 58 per cent. I honestly wish I could drop it down further. Season 2 has two episodes left to go.
Posted by Grant at 3:27 PM