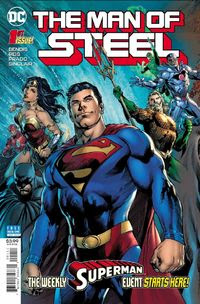 After much in-house promotion and hype, former Marvel Comics writer Brian Michael Bendis makes his DC Comics debut with The Man of Steel, an all-new six-part weekly focused on Superman. There's a new villain on the horizon: Rogol Zaar, a hulking scarred alien intent on wiping out all Kryptonian life - and while he's introduced here in flashback, we have already seen back in DC Nation's prologue sequence that he is on his way to Metropolis soon. There is also a new deputy fire chief in town, who weirdly seems set up as a new love interest for Superman - but where is Lois? A two-page epilogue hints that something terrible has happened to both Lois and her son Jonathan.

This is a solid opening without ever feeling sensational. Bendis' dialogue is remarkably wordy, which slows down the book's reading time considerably and also slows the narrative pace. Ivan Reis and Joe Prado's artwork is strong and detailed, and it is great to see Superman back in his archetypal 'red shorts' costume. It's been a while.

All signs are that this is going to be an entertaining miniseries without being a particularly groundbreaking one. Bendis clearly has a handle on Superman as a character, so now it's just up to the readers to wait and see how things develop. (4/5)

Under the cut: reviews of Daredevil, Descender, Justice League: No Justice, Ms Marvel, and Saga.

New York City is overrun by the hand, and Matt Murdock is stuck pulling double duty as both Daredevil and city mayor. A nice guest appearance aside, this feels a slightly less dramatic issue of this growing story arc: it propels things along nicely, but lacks the energy that previous issues had. Despite some good writing by Charles Soule, and some very nice artwork by Mike Henderson, this feels very much like a typical 'middle' issue. It's the installment you have to have to make the overall story function. (3/5)

The UCG have unleashed their own Harvester, which could spell doom for all of their enemies - so long as they can capture Tim-21 to control it. Whether this current story arc is the end of this science fiction epic or not, it is certainly the end of something. All of the characters and story threads have finally converged in one pitched battle, and whatever happens next is anyone's guess. It is impressive to see Jeff Lemire's script pull everything together in such a natural and satisfying way. Dustin Nguyen's watercolour art continues to provide a striking contrast to the tech-heavy story. (4/5)

No Justice ends messily, much as most of the miniseries has done since it started. There are some nice spots of humour and big-panel action going on, and some nice art by Francis Manapul, but this was too big a story to fit into 80 pages over four weeks. It leaves the Justice League set up with three teams - and three forthcoming titles - so for DC I guess it's mission accomplished, but there's an overall sense of disappointment. This premise and set-up could have been a lot more effective and enjoyable with room to breathe. (3/5)

Another old Ms Marvel villains returns to torment her, which is cause for celebration in more ways than one. That it's fun to have an enjoyable villain back is reason enough, but it is so wonderful when you consider that Ms Marvel has run long enough and been popular enough that she now has her own developing rogue's gallery. You can mark a successful superhero by their enemies, and she's slowly assembling a whole group of them. It is wonderful to see. (4/5)

There is a clear formula to Saga; while Brian K. Vaughan's script may vary the sequence a little from arc to arc, in broad strokes it remains. New setting, a family finding happiness in terrible situations, an unexpected character death, a shock betrayal or twist, and a surprising change to the status quo - often accompanied by a jump forward in time. This issue sees the current ninth story arc at the "shock betrayal" stage. It's all very enjoyable, but I noticed some time ago this book had lost its edge that made it so addictive for the first year in particular, and now just feels like a comforting standard on the comic book shelves. (3/5)
Posted by Grant at 1:11 PM