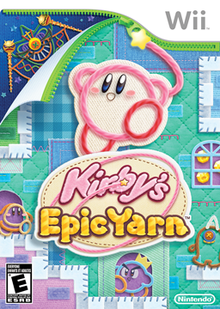 Reviewing videogames is often a challenge for me, because I absolutely suck at videogames and rarely finish one for months on end - if at all. It's a combination of incompetence and a short attention span, I guess. What if I just reviewed a bit of a videogame, though? What if I just spent an hour on it and then gave my thoughts on that? It seems a lot more feasible, and it's still going to give a solid critical impression - if a game has not grabbed you in 60 minutes, what are the odds of you playing further anyway?

Kirby's Epic Yarn is a 2010 platform game developed by HAL Laboratories and Good-Feel for Nintendo's Wii console. It features HAL's oddly enduring pink mascot Kirby, and is styled so that all of the characters look as if they have been made out lengths of colourful wool.

I describe Kirby as 'oddly enduring' because in all honesty I am not certain why the character has lasted as long as he has.

There have been 20 Kirby titles between 1992's Kirby's Dream Land to 2018's Kirby Star Allies. They have mostly been platform games, aimed at a rather young demographic. While you could easily identify a Mario game or a Sonic game from their common platforming styles, I have always found Kirby a little more difficult to pin down. A common early feature was the ability to swallow enemies and take on some part of their characteristics, but this has by no means seemed an overwhelmingly common feature. Certainly it isn't evident in Epic Yarn, which instead has a woolen Kirby use a loose strand of thread to pull at buttons or zips to transform and navigate across as craft-inspired landscape of cute creatures and plants.

Based on the first hour at least - which allowed a leisurely run through the first world's worth of stage - it is a very simple affair. It's impossible to die, as far as I can make out, and it is not a challenge to simply run through each level without much trouble. Finding and capturing all of the various beads and gems used to score one's progress is, of course, more difficult, but the ultimately easy style of gameplay does ultimately make everything feel a little too low-key to play for too long.

Young children will likely have a ball, and I suspect that's the game's target audience. For anyone else its amiable, but somewhat ordinary. It has a lovely aesthetic and an easy charm, but that only takes a game so far.
Posted by Grant at 4:50 PM