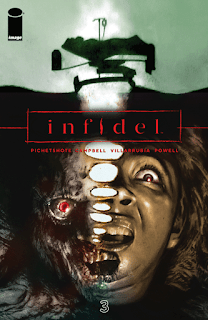 Aisha is in hospital, still unconscious. A neighbour witnessed her push her future step-daughter and mother-in-law down a flight of stairs, something that Aisha's best friend Medina cannot believe. In the apartment building where the event allegedly occurred, something supernatural is growing in the corner of everyone's eyes.

We are at the halfway mark of the five-issue miniseries Infidel, and at this stage it seems a strong bet to be one of the best American comic books of 2018. This is a hugely effective horror story with very effective artwork by Aaron Campbell and colourist Jose Villarrubia.

Like the best horror, however, this feels like it's about something: Islamophobia is a major theme for Infidel, and the core of this issue is a confrontation between Medina and another resident in the apartment building who swears she saw Aisha commit the assault. The manner in which the conversation turns ugly is very believable, and adds a welcome layer on top of the growing supernatural elements. (4/5)

Under the cut: reviews of Aquaman, Batwoman, Usagi Yojimbo, and The Wild Storm.

Aquaman finally comes face-to-face with Atlantis' deranged King Corum Rath. It's been many months coming - so many, in fact, that this generally excellent epic storyline of a rebellion in Atlantis has started to drag just a little. It is only a little, however: Dan Abnett handles his expansive cast well, and the artwork by Riccardo Federici is absolutely gorgeous to read - and is very nicely and subtly coloured by Sunny Gho. Hopefully things hit their climax soon though, otherwise the niggling sense that the story is slowing down is just going to grow. (3/5)

Kate's sister Alice has returned, unleashing a fatal virus through Gotham City via its bat population, and Kate is now racing against time to stop her. The past year or so of storyline is all tying up here, with one issue left to go. 'This last year was another lost year,' Kate thinks at one point this issue, and it's striking how a comic book's protagonist can admit what many of its readers could already tell you. Batwoman is a character trapped in back story and flashbacks, and until DC allow the character - who is wonderfully appealing and likeable - to stretch into the future, these Batwoman comics are going to keep failing. (2/5)

Usagi and Ishida continue their investigation into the murderer of a Christian samurai. I've mentioned in an earlier review that Sakai's work really feels deeper and richer with longer story arcs, but now that're three issues into this seven-issue storyline you can really feel that depth now. There is space for a complex plot and a broader range of characters. With the city setting the art feels a little busier than usual, but it's still visually great and beautifully told, and Usagi and Ishida make the best detective double act. I particularly like the story angle on Christians in hiding: it's a provocative element of Japanese history to dwell upon, and is providing a strong mystery in return. (4/5)

Now both writer Warren Ellis and publisher DC Comics made it very clear from the outset that The Wild Storm (a) was one extended 24-issue storyline, and (b) was going to reboot and re-imagine the entire Wildstorm line of comic book characters. That in mind, it feels churlish to then criticise the book for being too long and complicated without reaching any kind of climax or peak, and for constantly introducing more and more characters until I for one am simply failing to completely track what is going on any more. Moment to moment this is still great stuff, but my interest in the overall story is beginning to flag. (3/5)
Posted by Grant at 1:06 PM