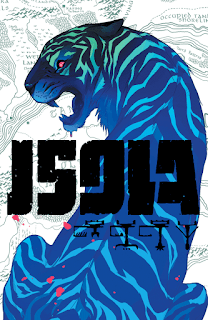 A soldier named Rook makes her way through a ruined civilization, escorting a blue tiger - which appears to be a magically transformed queen. When exploring the remains of a stone city, Rook discovers an old acquaintance - but it is not the friendly reception that she needs.

The art and colours are what initially sell Isola: the book simply looks looks gorgeous, with a crisp design and rich palette that brings to mind some of the best American cel animation of the 1990s. The book is rich in atmosphere and feels hugely evocative.

What cements the deal is the writing. Fletcher and Kerschl have developed an involving and effective fantasy world, but they are deliberately drip-feeding it to the audience. It all positively drips with back story, but the slow reveal is keeping up the suspense over what exactly has been going on. This is a tremendous book. (5/5)

Under the cut: reviews of Oblivion Song, Port of Earth, Prism Stalker, Punk's Not Dead, The Spider King, and a belated review of The Terrifics.

Nathan Cole heads back into Oblivion, while the Crenshaws struggle to return to life in the everyday world. Robert Kirkman's knack for gripping, character-based genre drama is in fine form in Oblivion Song. It's got a high concept and thus far he's been working it very effectively. This issue is perhaps a small drop down in momentum from the first two, but that's not an uncommon effect around the third issue of a storyline. Lorenzo De Felici's artwork is perhaps a little too simple for the action-horror story that it's telling, but it does have a stripped down sort of an effect, and is growing on me. (3/5)

In the aftermath of the alien incident, George is taken off-duty and sent for a psychological evaluation. He soon realises that the incident is far from over, as the spaceport's alien controllers arrive for a meeting with Earth's security forces. This series has transformed into a neat science fiction thriller, with a building conspiracy and interesting plot developments. I particularly like this series' use of television news media to inform the reader about the world and the alien spaceport at the story's centre. It's excellent science fiction for comic book readers. (4/5)

Vep's training shifts to psionic forms of martial arts, something that she struggles to develop while the pressure from her masters increases. Prism Stalker is gifted with that remarkable 'it' quality: the artwork is not, by typical comic book standards, too effective, and the storyline has to date been relatively simple and slow. There's just something about the series, however, that makes it an addictive read. Part of it is the Moebius-like fantastical world in which Vep lives. Another part is its rich and attractive colours. It's all unusual, but so very readable. (4/5)

Fergie and the punk ghost Sid try to re-spark Fergie's newfound powers, while Dorothy Culpepper and the Department of Extra-Usual Affairs arrive in Wigan to track them down. This fourth issue of Punk's Not Dead is a rock-solid blend of rich, colourful artwork, Vertigo-style characters and British pop music references. We also get some development for the overall arc and the characters: it seems Sid is not who or what he thinks he is. (4/5)

A viking conflict has been wildly disrupted by a crash-landed alien spacecraft, one of the inhabitants of which has fused with a man named Aarek to form the mighty 'spider king'. There is a rather delightful contrast between the relatively violent story of The Spider King, and the very cute art style. The art reminds me quite a lot of Francophile children's titles like Asterix, and that's just weird enough to work. The humour's good, the premise is entertaining; The Spider King has turned out to be quite a lot of fun. (4/5)

Mr Terrific, Plastic Man, Metamorpho and Phantom Girl are back on Earth, but some unknown effect has forced them to stick together or be destroyed. While the team begins to bicker and fight, Mr Terrific looks for a means of removing the effect. This issue came out a few weeks ago, but it took until now for me to track a copy down. I love the combination of heroes in this comic, but so far their bickering and the occasional segue to set up future plots is feeling a little old-fashioned. There's no 'wow' factor here yet, and the forthcoming tie-in to Alan Moore's Tom Strong still feels like a misguided and mercenary idea I'd rather the book avoided. It's broadly entertaining, but to be honest I don't see it lasting for too many issues. (3/5)
Posted by Grant at 9:13 AM