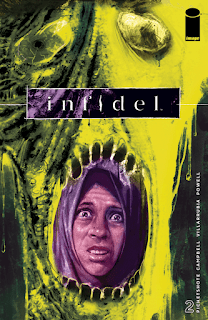 Aisha is a Muslim engaged to a non-Muslim named Tom. After moving in with Tom's bigoted mother Leslie, Aisha has started to hallucinate ghostly apparitions around the apartment building. Trying to convince herself it is all a side effect of her medication, Aisha makes the attempt to push through - but it is soon apparent that the hauntings are both real and dangerous.

Infidel's second issue further cements it as a top-notch work of horror, using its supernatural conventions to play with issues of religion, Islamophobia, multi-culturalism, and racism. Pornsak Pichetshote's script is well plotted and nicely creepy, while incisively hitting the sub-texts in a provocative and efficient manner. Aaron Campbell's artwork has a nicely realistic style that emphasises the horror elements brilliantly. Jose Villarrubia's colours have a clear strategy and structure to them, and that enhances the horror still further.

I think comic books are a comparatively difficult medium in which to express the horror genre, but Infidel manages it so well. Now that we are two issues in, it seems safe to name it one of the year's strongest American comic books. If you're a horror enthusiast you need to check it out. (5/5)

Under the cut: reviews of Aquaman, Batwoman, Deadman, Punk's Not Dead, and Sonic the Hedgehog.

The revolution against the cruel Atlantean king Corum Rath is reaching its climax. The people are massing together to overthrow the despot - but he has a last-ditch plan of his own. Robson Rocha, Daniel Henriques and Danny Miki have put together some excellent arc for this finale storyline, continuing the winning run that Aquaman has enjoyed with artwork in the past year or so. Dan Abnett continues to provide a strong storyline too - although this had better be the climax, otherwise the Atlantean uprising is probably going to start stretching one's patience. (4/5)

I honest-to-god intended to cancel my subscription to this: Batwoman is a tiresome character. The actual scripting here is perfectly solid, and the artwork has appeal. The character, however, is stuck in an interminable loop. Kate Kane is haunted by her past. No matter what else happens, the longer she appears on the comic page the more likely it is that she is going to get sucked back into some interminable family tragedy. It simply drags to read about it at this stage. (2/5)

Deadman's quest to find his missing brother takes him to Rama Kushna, and to- well, to a sudden cliffhanger ending. It isn't even really much of a cliffhanger actually, more a sort of narrative shrug of indifference and a note to follow the story in Batman: Demigods War - whatever that turns out to be. Batman is even on the cover of this issue, without actually appearing in the book. It's clear at this point that DC is just tolerating an industry veteran's rambling flights of fancy. I don't think anything about this book has been remotely pre-planned, and now that it's at an end it is difficult to find any satisfaction in having read it. The classic art style is pretty, but when the story is this bad no art in the world can really save it. This issue is just dreadful. (1/5)

Asif and Culpepper head north to Wigan, on the trail of paranormal activity. Meanwhile Fergie discovers Natalie shared the same dream as him. The spirit of old Vertigo continues in this funny and inventive third issue. Martin Simmonds' artwork is a real star here, with a detailed and evocative design and feel - particularly in one striking supernatural sequence featuring hallucinatory blackbirds. It's fantastic stuff, and this comic continues to make a positive impression. (4/5)

Three issues in three weeks is making this all-ages comic book really fly along. In this issue Sonic teams up with Knuckles the Echidna to rescue a town of animals from a pair of thugs. Knuckles has irritated me ever since playing Sonic the Hedgehog 3. Now Sonic himself was designed as an 'extreme' competitor to Nintendo's Mario: sharper, edgier, and so on. Knuckles seems designed as an 'extreme' competitor to Sonic, and that's just too much 'extreme' for my liking. The story is functional, but the art lacks the spark of the last two issues. It's readable, fans and kids may have fun with it, but it's pretty ordinary stuff. (2/5)