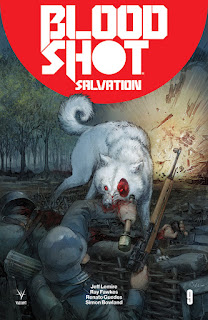 There is likely to be a lot of fresh interest in Bloodshot over the next year or two, now that Vin Diesel has signed on to play Valiant's immortal soldier in a major feature film release. This latest issue - the ninth in the current volume - is an unexpected shift from the usual stories of a nanite-boosted super-soldier. Instead it's the story of his dog.

A scientist comes to the trenches of World War I to test his latest invention - one that just might save the war. It's undead dogs. Impervious to pain, without fear, and able to recover from any injury, they are to be tested in a charge against the Germans. It's a bleak but cleverly developed one-shot, with a script that tells a satisfying and emotionally effective story in just a handful of pages.

The real star is artist Renato Guedes, who gives the story a much-needed realist aesthetic, one coloured with suitable levels of blood and grime. It seals the deal on making Bloodshot: Salvation #9 a hugely satisfying experience. (4/5)

Under the cut: reviews of Daredevil, Rat Queens, and The Wicked + the Divine.

Matt Murdock is New York City's new mayor, and the city is under attack by hordes of ninjas. Trapped in his new job, Matt desperately needs to hit the streets as Daredevil - but how? What seemed like a slightly truncated story arc about Wilson Fisk becoming mayor has expanded into an epic length storyline with surprise twists and turns, and great moments of character. Mike Henderson's artwork has a nicely idiosyncratic edge to it, one that complements Matt Milla's subdued and moody colours. This book is firing on all cylinders at the moment. (4/5)

There is something about this second volume of Rat Queens that just feels like a series going spectacularly off the rails. The storyline feels confusing and muddled, and there's a weirdly disjointed nature to the entire arc. This issue an apparent jump into a flashback is followed by a jump well into the future, none of which comes any closer to explaining what the hell has been going on of late. Perhaps I'm just dense: I have no idea what's going on in this comic any more. In a collected edition, it might work, but after all of the delays, artist changes and over-ambitious storytelling, I feel the core of the series has been lost. Rat Queens used to be fun. (2/5)

Another experimental issue that is likely to divide readers. Personally I loved it. The second half is straight-forward enough, delivering yet more revelations and back story. It steers the series closer to its conclusion, with the tension continuing to ramp up with each month. It's the first half that's more fascinating, showcasing several thousand years of Ananke keeping the great darkness at bay. Some may find it tiresome. I found it absolutely remarkable, without an outstanding attention to detail. (5/5)
Posted by Grant at 9:35 AM