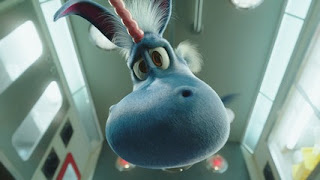 It is 6 December 2017, and time for the premiere episode of Happy!.

Based on a comic miniseries by Grant Morrison and Darick Robertson, Happy! is an absurd - and absurdly violent combination of grimy crime thriller and black comedy. Violence abounds, and over-the-top jokes and pratfalls sit uneasily alongside grotesque moments of horror. The episode works surprisingly well in fits and starts, but also makes several awkward missteps. It gets there in the end, but I suspect it will lose a fair proportion of viewers on the way.

The premise is distinctive and wonderfully ridiculous, and leads to scenes of a grizzled and badly wounded gunman staggering around a hospital ward arguing with a flying blue cartoon horse. When the bleak horrors of Nick's violence contrast against the bright, colourful innocence of Happy the episode works at its absolute best. When the episode slips, however, it does so quite badly. The "Very Bad Santa", who kidnaps young children and nails them into wooden crates, is simply too horrible and unpleasant to enjoy. Likewise an early scene involving a sex worker and a homicidal man with a hammer and an inflatable prawn costume (I swear I am not making any of this up) pushes the limit of taste to something fairly unwatchable - at least for my tastes. This is very much a "Marmite" kind of a series, and it's clearly going to have as many people loving it as hating it.

Christopher Meloni is stunning as Nick, playing a character completely unlike his usual stock-and-trade, and playing it astonishingly well. Nick is a complete ruin of a man, and does many very unlikeable things, yet Meloni manages to create someone that is both engaging and sympathetic despite his actions and surroundings. As the voice of Happy, Patton Oswalt is pitch-perfect; he already demonstrated great skill creating cartoon voices in Pixar's Ratatouille some years back, and he has not lost the knack.

While it takes a few minutes to settle into its tone, "Saint Nick" wraps up as a highly original and perversely funny hour of television. It has levels of crude comedic violence rarely seen on American screens. It's well cast and honestly unlike anything else on screen; that alone makes it well worth checking out.
Posted by Grant at 9:04 AM