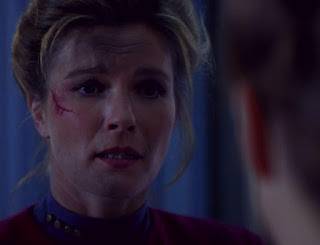 To avoid approaching a Vidiian colony, Voyager tracks through a nearby nebula only to be bombarded by subspace turbulence and unexplained proton bursts. The ships is catastrophically damaged with extended loss of life - including Ensign Harry Kim (Garrett Wang) - and unless the mysterious bombardments can be blocked, the entire ship will be destroyed.

"Deadlock" is the most dramatic episode of Star Trek: Voyager yet. It is packed with action, crises, character deaths, and the sort of batty pop science that is the franchise's stock-in-trade. The opening act may be one big 'gotcha' at the audience, but it's a surprise that they hold out for an impressively long amount of time. A few weeks ago I pointed to "Meld" as the best episode of the series to date; "Deadlock" is better.

The episode's early scenes are catastrophic for the Voyager crew. Damage across all decks, mass casualties, and no sign of the crisis letting up for a second. It is edited at a breakneck pace and shot with handheld cameras to increase the sense of chaos. Ensign Wildman goes into labour - something teased throughout the season - only to lose her baby. That jolts sharply: it's the kind of very real tragedy that Star Trek traditionally avoids. Kim and Torres (Roxann Dawson) undertake a life-or-death repair operation, and in a horrifying moment Kim is blown out into space. Again: this never happens.

Then suddenly we are on another Voyager, where all is well save for some strange readings on the sensors and the appearance of a strange visitor in the sickbay. One immediately starts going through whatever the solution could be: time travel? A time loop? A parallel universe? It is then, about a third of the way through the episode, that the truth is revealed and the episode is thrown for another loop.

The episode ducks and weaves its way into a solution - as the viewers would expect - but strangely it is not the solution most would be expecting. There is a real sense of human cost and loss to the episode, so that when things are tied up like they always are in pre-Discovery Star Trek there's a bit more weight to it. It feels different this time around. For once, the catastrophe switcheroo has a proper emotional impact.

This is a marvellous episode, and superbly directed by David Livingston. It is the 13th good episode out of 21 - and it really is the very best of the set. Season 2 continues with a quality ratio of 62 per cent.
Posted by Grant at 12:09 PM