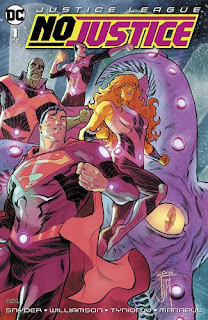 A lot of long-term DC Comics readers will be familiar with the Source Wall: a massive impenetrable barrier on the edge of the universe. For the first time that wall has been blown wide open, and something unimaginable is crossing through into our universe. Seeing the imminent threat, the alien villain Brainiac has assembled an unwilling team of heroes and villains to save reality before it is too late.

The appeal of Justice League: No Justice, a four-issue miniseries designed to set up the next wave of Justice League titles, is the manner in which it assembles four disaparate teams of characters to head out and complete four separate missions. A good superhero universe always rises or falls on the back of its characters, and a series like this makes great use out of how they interact with one another in surprising and entertaining combinations. A particular highlight is Starro, a maniacal psychic alien starfish who would be just about the last character you'd expect to see joining the Justice League. It's a positive delight.

The story and set-up is fairly simple, but the interplay sells it. The script by Snyder, Williamson and Tynion is funny, and the artwork by Francis Manapul is great - as his work always is. I'm a sucker for these kinds of big screen DC miniseries, so I'm already hooked. (4/5)

Under the cut: reviews of Batgirl and the Birds of Prey, Detective Comics, and Star Wars: Darth Vader.

Batgirl and the Birds of Prey #22

The Birds of Prey make a final showdown against the Calculator, in this series finale. The issue actually works pretty well as a finale for both the story arc and the whole comic, giving the characters a proper ending while leaving all of the toys carefully packed in the DC toybox for the inevitable new volume of Birds of Prey in a few years' time. It's a shame this book couldn't quite sustain itself: it's had some solid stories, and showcased one of DC's best character combinations in Batgirl, Black Canary and Huntress. On the plus side, it's going out on a high. (4/5)

"Batmen Eternal" enters its fifth part, with Tim Drake absorbed by OMAC and Batman's remaining allies grouping together to stop him from changing the course of history. For a large part of this issue it feels a little under-cooked - certainly the addition of Brother Eye and OMAC to the storyline feels as if it's muddied the narrative terribly. Then a late development in the issue pushes it from good to great; fans of Stephanie Brown and Cassandra Cain may want to give this issue a look. It leaves everything in a great place for what I'm guessing is the finale in two weeks. (4/5)

The first story arc concludes with a shocking development that I never saw coming. Watching Poppy's plight develop - she's trapped in a royal court with a king who won't let her leave, and a mysterious enemy plotting to assassinate her - has been hugely entertaining. There is tremendous depth to this book: emotionally but particularly in terms of character. The rich environs of Sleepless have been patiently teased out over six issues, creating one of the best and most detailed worlds I've seen in comics in a while. I've been repeating this for a few months running: this is a must-read comic for fantasy fans. (5/5)