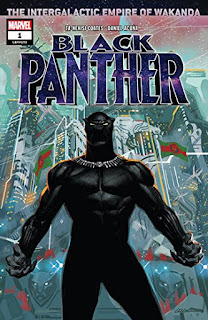 I am an absolute sucker for space opera comics. Anything involving intergalactic empires, freedom fighters, alien species, laser gun fights, space battles - if it's in that general area, it will probably be in my wheelhouse. It is often great when a superhero comic starts to play around in that area too. I adored the "Planet Hulk" storyline in The Incredible Hulk, as well as the most recent volume of X-O Manowar, and one of the best monthly comics of DC's "New 52" initiative was Tom King's superb The Omega Men.

Add to that list Marvel's latest relaunch of Black Panther. It's set 2,000 years into the future. The Wakandan Empire stretches across huge tracts of space, enslaving other races and ruling with a violent and oppressive fist. Into the environment comes a new group of rebels and freedom fighters, styling themselves after heroes of Wakandan history and all dressing like Black Panthers.

It's a great idea, and feels like a genuinely fresh take for Marvel at a time when the publisher is really beginning struggle with its sales. Hopefully this new story will catch on, because it really feels like a model to open the Marvel Universe to a much wider range of stories. Ta-Nehisi Coates writes one hell of a first issue, and it's very effectively illustrated by Daniel Acuna. I'm hooked. (5/5)

Under the cut: reviews of Detective Comics, Doctor Aphra, and The Terrifics.

James Tynion's long, complex run on Detective Comics hits its conclusion, and it's an effective and emotional powerhouse. It provides a powerful climax not only for Tim Drake, but Bruce Wayne, Kate Kane, Cassandra Cain, and Stephanie Brown. It pushes characters into new places, repairs and reforges relationships, and - as is always the way with the ends of long arcs - carefully puts the toys back into the chest for the next writer to play with them. This has been an excellent run. It is certainly the best superhero work Tynion has written to date, and it is fantastic to see it wrapped up so beautifully. (5/5)

Chelli Aphra has upset the Empire and the Rebellion, and now she's a prisoner on a flying penal colony while her former employer the droid Triple-Zero hunts her down for encrypting his most valuable memory files. One of the strengths of this book is that it really does up-end Aphra's situation every story arc. First she was reluctantly travelling with her father, then she was doing Triple-Zero's bidding, and now she's a prisoner of the Empire. The tone remains, as does the great balance of humour and drama. (4/5)

With a small jump ahead in time, the Terrifics (Plastic Man finally names them this issue) take to outer space to deliver Phantom Girl back to her home planet so she can visit her parents. En route, their T-Sphere vehicle is apprehended by junk dealers and a giant alien octopus. There's a pleasant, breezy appeal to this issue, and a nicely measured conclusion that brings it down well, but this is ultimately a very low-key book. It's enjoyable enough, but there's an overriding sense that everyone could be doing a much better book somewhere else; something other, perhaps, than a Fantastic Four pastiche. (3/5)
Posted by Grant at 7:20 PM