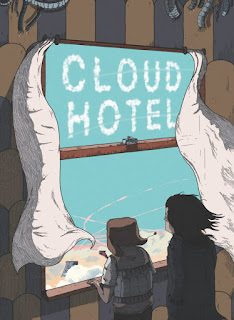 A 12 year-old boy who likes to call himself Remco gets taken by a bright light in the woods, and wakes up in the surreal Cloud Hotel, hidden in the sky and populated by other children. While Remco seems able to return back down to Earth and come back again, a girl named Emma seems trapped there forever.

Cloud Hotel is an original graphic novel from the award-winning writer and artist Julian Hanshaw. It is a distinctive and moving work, one soaked in surrealism and melancholy. Partly inspired by a childhood experience, Hanshaw tells a story that feels poetic, funny and weirdly unsettling. It's quite hard to put a finger on it, but it's a story that I like.

His distinctive art style certainly marks its territory as an independent work. There is a sense of the grotesque about his characters, all with deep-set haunted eyes and squared-off heads. His use of panel layout is exceptional, particularly in some of the book's particularly odd and inexplicable moments. It may feel like a bit of a puzzle in terms of narrative, but it has a superb handle on tone. (4/5)

Under the cut: reviews of Darth Vader, Hawkman, and The Man of Steel.

On the ocean world of Mon Cal, Darth Vader's assistance in an Imperial invasion has led him to the Jedi Master Ferren Barr. With Barr's apprentices almost entirely wiped out, all that remains is for Vader to eliminate the Jedi himself. Or is Barr a Jedi at all any more? There's some nice character work in this arc finale, which manages to lift the issue above the standard by-the-numbers fare that books like this can easily slide into. Camuncoli and Orlandini's artwork is great, as are Curiel's colours. There's been perhaps a little too much continuity and easter eggs in this arc, but it's managed to stay just on the right side of interfering with the story. (4/5)

Whether Carter Hall or Katar Hol or some variation in between, Hawkman has spent the last few decades as a character with a great look and a tortured back story. He's a great character, and DC would have a lot more success with him if they just picked a version of the character and stuck with it. This post-Metal relaunch decides to go with all of the back stories at once, making Carter an oft-reincarnated hero whose soul has travelled not just through time but space as well. It's like asking a child to pick a flavour and have them shout 'all of them!' before running around the store in a state of sugar-enhanced mania. I'm a teenager of the early 1990s; I really just want Katar Hol the space cop back. There's some decent dialogue here, a nice action sequence and great Bryan Hitch artwork, but I wish they'd just pick a side of the fence and move on for good. (3/5)

A remarkably brisk read continues Superman's investigations into arson in Metropolis, finally brings him face-to-face with his new alien nemesis - and in between engages in a really blunt, sensationalist act of destruction. For long-time Superman fans it will have a hell of a sting, and feels like a cheap stunt, but you can't always judge a storyline mid-stream so I am waiting for the end to fully judge what's just happened. This issue benefits from having the one art team (bar another flashback page by Jason Fabok), so everything feels more consistent. It's easily the best issue of the three to date. (4/5)
Posted by Grant at 9:19 AM