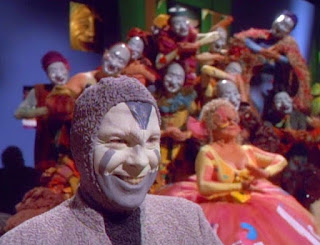 Voyager detects signs of life beneath the surface of planet rendered lifeless by an ecological disaster. They find several humanoids alive inside life support pods, each with their mind wired into a collective virtual environment. When Lieutenant Torres (Roxann Dawson) and Ensign Kim (Garrett Wang) enter the environment to make contact, they find the humanoids trapped at the mercy of an insane artificially intelligent clown (Michael McKean) - and once they arrive, the clown won't let them leave.

"The Thaw" is one of those unexpected Star Trek episodes that seems dreadful at the beginning - a mad horror circus is the sort of thing The Next Generation would do in a holodeck-based episode - but which unexpectedly unfolds into some genuinely interesting and entertaining.

It helps that there is a proper science fiction concept underlying the main action. A colony was about to be destroyed, several scientists built an underground shelter, and then placed themselves in a form of suspended animation until they could be rescued. For entertainment they connected themselves into a joint virtual environment, and once activated it pulled their own desires and thoughts out of their minds, got caught into a feedback leep, and has been feeding them terrifying nightmares for five years running.

The other ace up the episode's sleeve is guest star Michael McKean, a hugely gifted comic performer who creates a wonderfully malevolent villain out of the Clown. He commits fully to the role, and forms something that is both funny and a little creepy. The episode's bold production design gives it a weirdly retro feel. The colour schemes inside the nightmare, combined with the costume design, gives it a surprisingly classic Trek aesthetic. You could easily see a version of this story going to broadcast in 1968.

The plot has more than one surprise development, the guest characters are well developed and appealing, and it all comes to a perfectly timed and edited climax. This is probably the most surprising episode of the season: it's so much better than it seemed to be in its first few minutes. We're now 23 episodes into Season 2 with three episodes to go. So far 14 episodes out of 23 have been good. The quality ratio rises to 61 per cent.
Posted by Grant at 9:51 PM