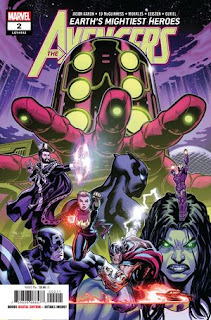 The new Avengers line-up converges as they fight the newly arrived Dark Celestials, and the villain behind the scenes reveals themselves. Jason Aaron and Ed McGuinness' fresh run of Marvel's lead team does pretty much what readers would expect: big-scale widescreen action featuring a range of popular characters.

I'm still not fully sold of McGuinness' art style, but this is a broadly entertaining story which will likely appeal a lot to readers that have been waiting for Iron Man, Captain America, and Thor to return to their historical seats at the centre of the team.

I am a little underwhelmed by Ghost Rider. The character works well enough in his own comic, but is a poor match for the bright, cinematic style of this book. It's also not the 1970s heavy metal styled Johnny Blaze Ghost Rider, but rather the fairly weird and unappealing  Robbie Reyes - who doesn't even ride a motorcycle.

That's a personal niggle, however: the bottom line is that The Avengers pretty much does what it says on the cover. It's a large-scale character-based action-adventure. If that's what you're after, that's definitely what you get. (3/5)

Under the cut: reviews of Batman, Justice League: No Justice, and Superman Special.

Booster Gold is generally a comedic character, which is what has made this bleak three-part story so weirdly addictive. This final chapter is particularly dark, with Booster's attempts to change history gone so horribly wrong that he's trapped in chains beneath Wayne Manor with a chain of people dead thanks to his own stupidity. Tony Daniel's artwork is superb - as it always is - and gives this storyline a particularly nasty sense of realism. It was an odd choice for a lead-up to Bruce and Selina's wedding, but then this is Batman: dark and bleak often goes with the territory. (4/5)

Earth has become the target of extra-universal titans, and the only superheroes able to stop them have been kidnapped and dragged across the galaxy to save Brainiac's home planet first. No Justice follows in the footsteps of Scott Snyder's recent miniseries Metal in more way than one: not only is it dealing with the consequences of that series, it follows it stylistically by throwing logic and story sense out of the window in favour of over-the-top madcap superhero action. If you ever wanted to see a Beastboy/Lobo team-up, or Starro the Conqueror joining the Justice League, this is definitely the book for you. It's not outstanding, but it's definitely fun - and long-term DC fans will likely dig the last page reveal. (3/5)

DC definitely jumped to Brian Michael Bendis' new take on Superman as soon as they can, because the previous run is getting a whole extra issue (I suspect very strongly that it was already in train when the choice to shift was made). Superman and Superboy return to Dinosaur Island to rescue Captain Storm - the WW2 captain they were forced to leave behind during their last visit. It's a nice piece of tidying-up, beautifully illustrated, and emotionally effective. The issue is bulked up with a few additional short pieces - in this case I suspect more leftovers from Action Comics #1,000. (4/5)
Posted by Grant at 8:40 PM