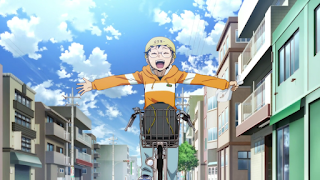 It is 28 October 2013, and time for another episode of Yowamushi Pedal.

While visiting the anime fan's paradise Akihabara, Onoda meets Naruko Shoukichi, a loud and aggressive cyclist from Japan's Kansai region. When a passing motorist flicks a lit cigarette onto Onada's bicycle, Naruko is incensed and insists they chase down the car on their bikes to flick the cigarette butt back. The chase further educates Onoda on the science and strategy of high-speed cycling.

There are two main elements to this fourth episode of Yowamushi Pedal. The first is an explanation for high-speed cycling techniques, including the use of gears and slipstreaming in high winds. The second is the introduction of the series' fourth key character: the noisy, brash and ridiculously self-centred Naruko Shoukichi.

So based on his debut appearance here I am not a huge fan of Naruko. He is deliberately savage in his appearance, with spiky red hair and a weird protruding fang when he grins. He is noisy and quick to anger. He is self-absorbed and dismissive. He spends Onoda's money to buy presents for his younger brothers and does not appear to pay him back (there is a coda to cover it, that I will not spoil here). The previous episodes have emphasised Onoda's loneliness and lack of close friends, but that still does not quite justify why he warms so immediately to such an abrasive and irritating character.

That said, it does get pretty entertaining when an offended Naruko demands that he and Onoda go cycling after a man in a sports car to throw back the cigarette butt he flicked at Onoda's bicycle. It's animated in a very kinetic fashion, and allows the series to once again explain in practice different aspects of cycling. It turns out that Miki installed a derailleur that allows Onoda's bike to change gears at least, which is a bit of a cheat - we only learn she did it when he needs to use it - but it's a nice excuse to explain to the audience how the gears work and how shifting gear will help Onoda as he rides.

Ultimately this is a good episode about a slightly tedious character. With luck future episodes will open Naruko up a little and show his other aspects. The series did an exceptional job with Imaizumi in previous episodes, making him much more than a stock archetype, so I have hope they will achieve that here as well. Four episodes in, and Yowamushi Pedal has been a wonderfully entertaining comedy-drama - not a single bad episode yet.
Posted by Grant at 5:02 PM