Star Trek: The Next Generation: "Chain of Command, Part I" 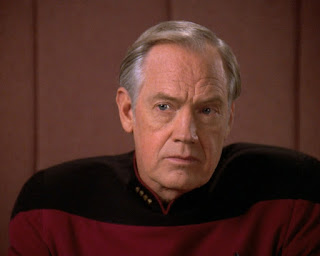 It is 14 December 1992, and time for another episode of Star Trek: The Next Generation.

Captain Picard (Patrick Stewart) is unexpectedly relieved of his command in order to undertake a top secret mission for Starfleet. In his place comes Captain Edward Jellicoe (Ronny Cox), a no-nonsense commanding officer with his own way of organising the ship - and who takes an immediate dislike to Commander Riker (Jonathan Frakes).

The path to Star Trek: Deep Space Nine received its final piece with "Chain of Command", a two-part storyline that brings back the Cardassian Union and emphasises their tenuous peace with the United Federation of Planets. It also throws a hugely entertaining wrench into the Enterprise's typically close-knit and cosy atmosphere. Edward Jellicoe is not like Captain Picard. We don't know him. He arrives abruptly. He immediately starts demanding changes. He rubs his entire crew up the wrong way. Riker looks to Picard for support, but Picard is already neck-deep preparing for a secret infiltration of Cardassian territory.

When Gene Roddenberry created Star Trek: The Next Generation, he was adamant that the people of the 24th century had resolved inter-personal conflict and would work collectively towards a common good. That is great as a utopian ideal, but it actually sucks at generating character-based drama. With everybody among the Enterprise's command crew liking and appreciating one another, there is simply no easy way to develop the sorts of disagreements and friction that would typically sustain an hour-long drama. Deep Space Nine would fix this problem by pitting the Starfleet characters against Bajorans, Ferengi and the like, but for The Next Generation it was a perennial issue.

Enter Jellicoe: he is not one of the regular crew, so the episode is free to demonise and hate him. He can be freely abrasive and unpleasant, and can butt heads with Riker, Troi (Marina Sirtis) and La Forge (LeVar Burton) without anybody worrying about how it will affect the interpersonal relationships over future episodes.

That in itself would make him an entertaining contribution to the episode, but writer Ronald D. Moore goes one step further. Jellicoe is not only a difficult captain, he's visibly a pretty talented and smart one. He has been temporarily appointed due to his experience fighting the Cardassians, and he brings that experience to bear in hugely effective ways. It's one thing to force Riker to work for a captain he hates, but it is a whole different level to make him work for a captain he hates who actually knows what he is doing.

Ronny Cox plays the role brilliantly, combining a tough, no-nonsense veneer with a very human undercurrent. He seems unsentimental, until we see him decorating his ready room with one of his children's drawings. He appears to maintain a big distance between himself and his crew, until he starts gleefully explaining his psychological strategy when dealing with the Cardassian envoy. It would be easy to play Jellicoe as a two-dimensional villain, but Cox makes him a properly realised person that I found myself beginning to like. He is not an idiot, and his way of running a ship may vary from Picard's but it is equally valid. He even finally gets Counselor Troi to actually wear a uniform on the bridge like a professional should. Somewhere in some parallel Star Trek Cox stars as Jellicoe in a weekly series about the USS Cairo, and I suspect that alternative universe audience likes him just as much as we all like Patrick Stewart as Picard.

Picard's secret mission acts as a B-plot: he, Worf (Michael Dorn) and Dr Crusher (Gates McFadden) sneak into a Cardassian weapons testing site only to discover it is a trap. There is no secret Cardassian super-weapon, just a lure for them to capture and interrogate Picard. The episode ends with his face-to-face with that interrogator, the ominous Gul Madred (David Warner).

This is a great episode with an awesome cliffhanger, one which promises two great British actors facing off one another in the second half. It is a hugely refreshing leap forward in quality for Season 6, after a very shaky opening third. With six good episodes out of 10, the quality ratio rises to 60 per cent.
Posted by Grant at 8:00 AM