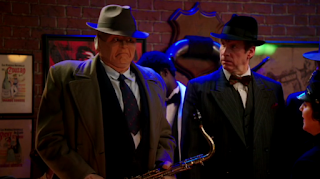 When a group of cyborgs travel back in time to change Earth's history, Lister (Craig Charles), Rimmer (Chris Barrie), Cat (Danny John-Jules) and Kryten (Robert Llewelyn) ride the timestream back to stop them. They discover an alternative 1920s America where technology has been outlawed and the cyborgs rule the Earth.

Red Dwarf returned last year for an 11th season, beginning with this time travel adventure. It's been a long-running series with some enormous gaps in between seasons: while this might be the 11th season, it comes a full 28 years after the series began. It feels old. It feels worn out and jaded. Obviously the cast are almost three decades older, but that's fine: actors get old, and there are always stories you can tell with a man in his 50s that you cannot tell about a man in his 20s. The cast have aged. The characters, by-and-large, have not. The series itself - the sense of humour, the plots, the gags - just feels so dreadfully, miserably old. Even the jokes are likely receiving an old age pension.

There is a profound and unhappy lack of enthusiasm to this episode, that reeks from a distance and oozes like a grey soup from each line of dialogue. The jokes fall terribly flat, because they all feel like variations of jokes we have heard before. The studio audience laughs at every one, but then it's been clear for a long, long time that the studio audience of Red Dwarf is always packed with long-term fans who laugh at any reminder of the original, funnier humour that used to typify the series. The cast seem generally unenthused as well. Craig Charles in particular spends much of the episode visibly one step away from breaking character and laughing out loud.

You can also see the joins in the story: the human-hating simulant villains from Season 6, the time-travelling mission of "Tikka to Ride", the alternate Earth of "Backwards", and so on. Nothing feels original, and every element feels like a weak variation or faded copy of something else. On top of that it isn't even copying the better side of Red Dwarf. Ever since its third season there has been a tension between the two kinds of Red Dwarf: the character-based situation comedy, and the more plot-driven science fiction comedy. I have always found the former style of the series vastly superior to the latter, yet as the years have gone on it has become clear co-creator (and last writer standing) Doug Naylor favours the latter. It's a much less effective style of television comedy, that attracts a hard-core following of geeks and nerds at the expense of proper character-based humour.

Visually the episode goes just fine, but it's arguable that the low budget of the preceding season (back in 2012) was part of what made it feel like such a refreshing return to form. "Twentica" flips back in the other direction, relying on a well of comedy that has long been exhausted. Not only is there a whole season left to go, they shot Seasons 11 and 12 simultaneously. We've got another 11 episodes between last year and this year: I truly hope they're better than this.
Posted by Grant at 5:37 PM