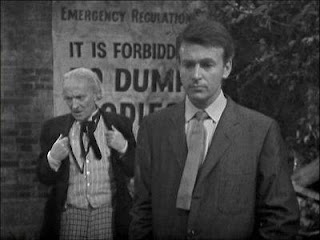 A man stands on the edge of the Thames in London. A bridge is behind him; it has clearly seen better days. Weeds have grown over rubble and wreckage. Behind the man is a large sign: "It is forbidden to dump bodies in the river". The man wears a strange mechanical apparatus around his head and neck. In a sudden, frenzied moment the man rips the apparatus away from around his neck, and then stiffly but calmly walks into the river and drowns himself. Once he is dead, the scene returns to a state of silent, desolate calm.

You really do have to pause for a moment to consider what has just occurred. All this in the first minute of an episode of Doctor Who. This is a television series for children, isn't it? Rubber-suit monsters abound, or historical figures dressed in wonderful period costumes, or William Hartnell as the Doctor coming up with a clever scheme to escape his latest adventure and return to his TARDIS. Instead there is death, and suicide, and the ruins of London. It is easily the most startling and eerily effective opening to a Doctor Who serial yet.

The TARDIS has materialised in London, but rather than 1963 - where Ian (William Russell) and Barbara (Jacqueline Hill) want to go - it is 2164. The city is made up of burned-out cars and ruined buildings. Survivors hide in the ruins, keeping low to the ground and well out of sight. Flying saucers occassionally hover overhead. When Susan (Carole Ann Ford) climbs a wall and accidentally dislodges a pile of wreckage on top of the TARDIS, she and her companions are once again trapped and must find a way to remove the huge metal beams that now block their path to safety.

The episode quickly splits the team into two. The Doctor and Ian go looking for some kind of cutting tool to burn through the metal beams. On their way they find evidence of people sneaking around, but on the whole the city is disturbingly silent. Barbara and Susan remain behind - Susan has sprained her ankle - and are quickly found and taken underground by a resistance force. Earth has been invaded, but Susan and Barbara are not yet told by whom. There is a tremendous sense of atmosphere in this episode, aided enormously by Doctor Who's first proper and extensive location shoot (a few shots of a stand-in walking down a road in "The Reign of Terror" hardly count). It is by a considerable margin the most adult episode of Doctor Who yet produced, and to my mind it is most likely the very best of the 46 episodes I have watched so far in this Hartnell-era rewatch.

After 23 minutes of ominous scene-setting and terrifying desolation, the Doctor and Ian are cornered by the river by a group of stiff, mechanised humans - each wearing the same metal apparatus as the suicidal man in the episode's opening moments. They are forced to the river's edge, where a Dalek slowly emerges from underneath the water.

It is a phenomenal moment. Hartnell and Russell's perfectly-played looks of horror, the eerie calm with which the Dalek approaches, and the total surprise for the unaware viewer. The Daleks have returned. It is the first time anything has returned in the series. What's more, they aren't comfortably in their metal city on Skaro, they are here on Earth. They have not merely attacked the planet, they have clearly already won. It is a stunning cliffhanger: easily one of the best the series will ever have.

The higher production values, the enormous care taken with sets and locations and Terry Nation's script all become clear. This is not just another Doctor Who serial. This is the series' first attempt at proper event television. It is something to grab the attention of a viewing public and have them talking about it at the pub that evening, or in the school yard the following Monday. This really is Doctor Who at its very finest. Four episodes into Series 2, and the quality ratio is still at 100 per cent.
Posted by Grant at 7:54 AM