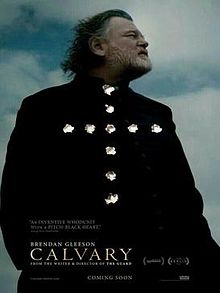 Father James (Brendan Gleeson) is a Catholic priest serving a small Irish coastal community. One day a man enters the confession booth and warns Father James that he is going to shoot him dead the following Sunday. Over the remainder of the week, James grows increasingly confronted as the people of the town seems to uniformly goad and mock him, and he suffers unexpected attacks on his life and those closest to him.

Calvary is an independent British/Irish drama by writer/director John Michael McDonagh, following in the footsteps of his highly regarded playwright and screenwriter brother Martin McDonagh (In Bruges). It has a deeply idiosyncratic, bleakly comic tone to much of the film, and brings together an excellent cast to bring the odd, troublesome town to life. The film centres upon a career-best performance by Brendan Gleeson, but sadly it is weakened considerably by a deeply uneven and occasionally flat-out ridiculous screenplay. Gleeson's performance and some excellent cinematography by Larry Smith pulls the viewer through, but in more than a few moments it is a bit of a rough ride.

There is a lot of good to McDonagh's screenplay, which tackles in a powerful fashion the effect of abuse scandals in the Catholic Church from the perspective of an entirely innocent, non-abusive priest. There is a underlying hostility towards him in the town, which is there for the film's opening moments but which gradually emerges as the story progresses. James is taunted and provoked in more and more open ways as the day of his apparent murder approaches. Brendan Gleeson plays this gradual unravelling of James' nerves and resolve superbly. His composure begins to crack. His faith in other people begins to collapse. It is a tremendously sympathetic portrayal.

The other characters are a bit less even. Kelly O'Reilly is very good as James' daughter Fiona, who has temporarily visited him after a failed suicide attempt. Chris O'Dowd, best known for comedies including The IT Crowd and Bridesmaids, is remarkably unsettling as a local butcher who allows his estranged wife to indulge in various affairs. Aiden Gillen, on the other hand, feels a little too mean-spirited and one-dimensional as a local coroner who indulges in constantly needling and offending James. He feels rather unrealistic and winds up rather tedious to watch.

McDonagh's screenplay does a marvellous job with Father James, but is much less successful when writing the characters and situations around him. The film rapidly becomes unbelievable, culminating in a bizarre sequence where James goes to see a former student - a young man who became a serial killer (played by Gleeson's own son Domnhall). The scene feels weirdly out of place and rather tacky, and does little to expand upon or enhance the film. From there the film does seem to fall wildly out of any proper sense of reality as more and more sensationalised things happen.

McDonagh's best achievements are in the small, early scenes. They are just that perfect amount disconnected from realism, giving the initial conversations a wonderfully odd and humorous quality. It's a shame these quality struggle to emerge during the later sequences, but thankfully they do return somewhat in the film's sudden, tense climax.

Despite all of these flaws, Calvary is still well worth watching. Gleeson drags the film behind him through the sheer force of his performance. He lifts up every scene that he is in. He has always been a deeply entertaining actor, but in Calvary he is simply transcendent.
Posted by Grant at 5:03 PM