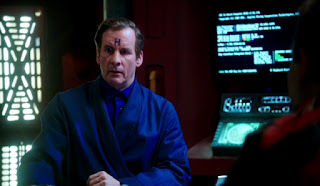 The Red Dwarf discovers an escape capsule. As it approaches Kryten (Robert Llewelyn) and the Cat (Danny John-Jules) speak to one of the survivors. When the capsule is opened, both survivors are dead. The capsule's trajectory is tracked back to a crashed spaceship - the Samsara - lying at the sea floor of an ocean moon. Once onboard Kryten and Rimmer (Chris Barrie) are separated from the Cat and Lister (Craig Charles) and the true horror of the Samsara is revealed.

Last week I complained about how weak and tired the season premiere of Red Dwarf seemed to be. It was filled with old, repetitive jokes, and drew its humour from science fiction concepts and situations without really exploiting the core cast for humour. I always feel comedy comes best not from story but from interaction between characters, and over the years Red Dwarf seems to have increasingly forgotten that fact. I'm not sure if "Samsara" is honestly any fresher - it's still recycling the same jokes that have maintained the series for close to 30 years - but it at least works with the characters this time around. The result is a genuinely funny, if old-fashioned, half-hour of TV comedy.

The characters that populate this episode feel like the characters from the series' early years. The exaggeration that increasingly warped them out of shape has been pared back nicely, leaving a Rimmer and Lister that - despite looking much older - ring true to the characters as they were originally envisaged. The same goes double for the Cat, who gets pretty much the best material of the entire episode. John-Jules rises to the challenge as well. He's self-centred and vain, hopelessly naive, and a bit of an idiot. This is the Cat I liked back in the late 1980s, rather than the fast-quipping joke machine about fashion styles that emerged during the middle seasons.

The episode does the thing that nearly always results in great Red Dwarf: it traps two of the characters together and forces them to have a conversation. I'm not sure Lister and the Cat have ever had such a sustained conversation before, and it works wonderfully. The humour comes from who they are much than where they are, or what they are doing. This is also typified by an early scene of Rimmer and Lister playing a board game together: it works because of how the characters interact.

All of that alone would make for a good episode, but writer/creator Doug Naylor also layers in a series of beautifully integrated flashbacks to explain what is actually went on in the Samsara and how it is affecting the Red Dwarf crew in the present. It is a nicely played mystery with a great, Douglas Adams-esque concept at its core, and it is well performed by Dan Tetsell and Maggie Service. It's a rare thing to see a TV series successfully experiment with its narrative format after more than 10 seasons and three decades, but Naylor achieves it here. The balance feels much more appropriate than in "Twentica": there's a cool science fiction story underlying "Samsara", but the focus is on Lister, Rimmer, Kryten and the Cat.

One bad episode and one good gives Red Dwarf's 11th season a quality ratio of 50 per cent. I really hope the next four weeks provide episodes that are more like the latter episode than the former.
Posted by Grant at 8:38 AM