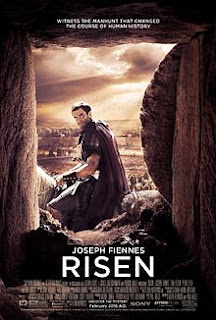 In AD 33 Jerusalem, a Roman tribune named Clavius (Joseph Fiennes) is assigned by Pontius Pilate (Peter Firth) to supervise the execution by cruxifiction of a Jewish agitant named Yeshua (Cliff Curtis). When Yeshua's dead body disappears - appearing to fulfil predictions of his resurrection - Clavius is dispatched to rediscover the body and hunt down the disciples who spread rumours of Yeshua's return.

Risen is based on what strikes me as a remarkably inventive premise. It tells the Biblical story of Christ's death and resurrection, which has been adapted to the screen many times, but it does so from the perspective of a Roman soldier and investigator. The result is an odd little film suck somewhere between religious propaganda and a period crime movie.

I suspect for a lot of non-Christian viewers the film's religious nature will be a severe turn-off. For those comfortable with that aspect of the film or who, like me, have no problem enjoying it purely as fiction, there is a lot here to recommend. It is an imperfect but interesting historical drama with decent performances, some great moments and a nice visual aesthetic.

Risen is directed and co-written by Kevin Reynolds, who has directed several films in the past that I have enjoyed including Robin Hood: Prince of Thieves and Waterworld. He most recently re-teamed with Kevin Costner to direct the excellent miniseries Hatfields & McCoys. He seems an odd choice to direct such a strong faith-based movie - and certainly the most prestigious director to handle such a film since Mel Gibson unleashed his gloriously unbridled The Passion of the Christ. He does a rock-solid job, utilising a mid-range budget to recreate an effective Jerusalem and present a Biblical story of resurrection and miracles with a minimum of visual effects.

Joseph Fiennes makes for a stoic Clavius, almost to the point of being a little wooden. He is surrounded by much stronger performers, however, playing much more interesting characters. Peter Firth makes a wonderfully cantankerous Pilate, while Stewart Scudamore brings an earthy, fallible reality to Peter the Apostle. The Apostles are generally well presented: they feel like real people, some reluctant doubters, at least one slightly mentally unwell, and that reality helps to ground the film. I think that is key to these kinds of films: to make them real. It is why Martin Scorsese's The Last Temptation of Christ remains my favourite Biblical film adaptation: it gets into Christ's head and makes him feel like a human being for once.

In Risen Jesus is addressed as Yeshua, and is played with great charisma and gentleness by Cliff Curtis. He feels distinctly different from previous film Jesuses, notably because he is not a pale Caucasian for once. Sadly his scenes often feel like the filmmakers are proselytising from behind the camera. There is a wonderful ambiguity to the film's early scenes that would have benefited the later ones. Risen works best when it is unclear whether Jesus is a genuine Messiah or whether he and his followers were deluded. Once events slip into direct Biblical miracles that ambiguity is lost, and a lot of my interest in the film ran away with it.

If you have no interest in stories of Jesus and the Resurrection, then obviously this is not a film for you. If you are a Christian that enjoys seeing stories of Christ played out beautifully on screen, it is probably a must-see. If, like me, you're entertained and fascinated by Biblical films but recoil as soon as you feel the religion is being pressed on you, then Risen becomes a mixed bag. I enjoyed it to a surprisingly large extent, but there was a pretty bit gap by the end between the movie I watched and the movie I wanted to see.
Posted by Grant at 5:15 PM