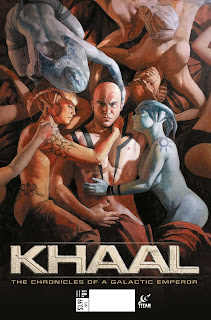 It is often difficult to track down English-language editions of French comic books. Cinebooks do an exceptional job, but they cannot adapt everything. It is interesting to see Titan Comics dabble in this area as well with Khaal: Chronicle of a Galactic Emperor, a 2011 bande dessinée series reformatted to an American comic book length and size and released last week to comic shops.

Khaal is set on a massive penal colony starship that, due to its isolated location and locked-down nature, evaded the destruction of a huge galactic war. Inside it is ruled by Khaal, a powerful human with psychic links to alien servants, who defeats any challengers to his rule in the arena. Meanwhile a small group of alien enemies conspire to overthrow him.

This is a very traditional French science fantasy epic, packed with sex and muscles. Valentin Secher's artwork is gorgeous in that typical Metal Hurlant style. For the most part Louis' script matches the tone, although scenes of Khaal and his harem of sex slaves feel woefully out of date and a little tedious to read. Overall I'd prefer seeing this series presented in 48-page perfect-bound or hardcover editions like French comics usually are: what we have here not only splits the narrative in two but shrinks the artwork down awkwardly to American dimensions. For anybody craving some old-fashioned sexy French comics, however, it is definitely promising stuff. (3/5)

In a shocking attack, Daredevil's sidekick Blindspot has had both of his eyes gouged out. Guilt was always Matt Murdock's strongest suit, and here we see him take out a contract on his own life just to beat up the parade of super-villains, mercenaries and assassins who turn up to accept the gig. He even goes to church - always a Daredevil staple - but finds no solace there either. This is very old-fashioned Daredevil (well, old-fashioned in the post-Frank Miller sense), but given the gravity of last issue's attack on Blindspot it seems appropriate. It was a horrifying moment, and the characters and readers deserve a month to let the gravity of it take hold. Goran Sudzuka's artwork is stark, moody and inventive. (4/5)

An explosion frees four women from captivity. They are suffering from amnesia, but as they go on the run from the police they each discover that they have specific powers. George Kambadais' artwork is simple yet expressive, with a restricted colour palette that adds to its distinctive look. Sadly Cullen Bunn's script does not manage to match it, telling a slightly confused story that winds up feeling rather unsatisfying. It does not feel as if there is anything particularly fresh here, and no real hooks to draw the reader into a second issue. I cannot say that I am enthused to continue reading, which is the kiss of death for a book like this. (2/5)

Domino is forced to put herself in danger to save an old girlfriend in this tantalising second issue of Motor Crush. More hints and snippets of information are dropped in over the course of the issue, which is rich in character and interspersed with nice moments of action. I was impressed with the first issue, and this just backs up and confirms my feelings. This is an energetic, smart and engaging science fiction action story full of technology, street racing, criminal gangs and excellent Babs Tarr artwork. I think they have hooked me in for the long haul. (4/5)

With Civil War II out of the way, Ms Marvel can get back to its core task: telling funny, angst-filled teenage superhero adventures. When another player in an online videogame appears to know Ms Marvel's home address, she immediately investigates and stumbles onto some unknown super-villain with control over all technological devices in New Jersey. This is a reasonably entertaining issue, but it does feel like it's in something of a minor key. The book has regularly been much better than this, and while it's perfectly readable it winds up feeling a tad disappointing at the same time. Hopefully it will pick up as this new villain is properly revealed. (3/5)

Poe continues his team-up with C3PO as they search for a missing intelligence agent among Threepio's droid spy network. While Poe and Threepio's mission is entertaining enough, the real meat of the comic comes from the continued fleshing-out and elaboration of Agent Terex - a former Imperial soldier turned First Order special agent. Phil Noto's artwork has been great these past few issues as he gets to focus on people more than starship dogfights. Tie in Soule's relatively inventive take on the Star Wars universe and you've got a winning combination. (4/5)
Posted by Grant at 9:06 AM