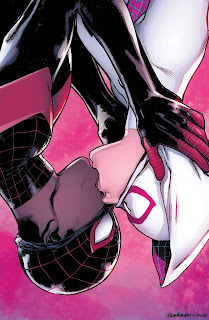 I have been fairly harsh on the comic book adventures of Miles Morales in recent years. This alternative universe Spider-Man started off so well, with a strong, likeable character and a great supporting cast, and creator/writer Brian Michael Bendis' excellent dialogue. Then his own adventures started to get derailed by constant and intrusive crossovers and events. I generally do not read Marvel's event series, because every time I do I seem to go away bitterly disappointed by them, and this makes all of those tie-in Miles Morales comics essentially a waste of time and money. Still I have persevered, because the character really is great, and I keep hoping beyond hope that he will one day return for a sustained run of self-contained adventures.

Spider-Man #12 gets it half-right. It is a crossover with Spider-Gwen #16, a comic that I do not read, and that is mildly annoying. On the other hand thus far it has not relied upon me having read an event series (most recently Civil War II - who won?) and seems to be telling its own story. The dialogue is great, and the flashback structure is pretty amusing - although it does get over-played a tad. Sara Pichelli's artwork is, as always, excellent, with varied panel layouts and great character expressions. It's a solid set-up to what looks like it could be a really fun issue over in Spider-Gwen, so much so that I will likely grit my teeth and buy it to see what happens next.

I do still hope Miles gets a bit more of a focus on his own book, but I will grudgingly take a contain crossover over an event tie-in. At least Marvel is headed in the right direction. Mind you: Spider-Gwen as a love interest over Ms Marvel? Don't do this to me, Marvel. (4/5)

Under the cut: reviews of Detective Comics, Doctor Who, and Dungeons & Dragons.

Ben Oliver illustrates the hell out of this issue. It has a beautifully realistic and painterly style that clearly couldn't happen every two weeks, but as an occasional guest appearance a comic book couldn't ask for much better. The storyline follows up simultaneously on two earlier story arcs. On the one hand, the Colony is back to reclaim its leader - and Batwoman's father - Colonel Kane from Batman's custody. On the other, the rotting corpse of a giant monster from the crossover "Night of the Monsters" turns out to be a valuable biological weapon, and the Colony is out to claim that too. It's all a set-up for the upcoming Batwoman solo series, but to its credit it works well as a continuation of this team book as well. (4/5)

Doctor Who: The Third Doctor #4

The third issue of this miniseries ended on one of the silliest fan-baiting continuity-abusive cliffhangers I have ever seen: the Second Doctor, apparently sent by the Time Lords once again to assist his successor, turned out instead to be the twin double and 21st century dictator Ramon Salamander - last seen plummeting into the time vortex at the end of "The Enemy of the World". To Paul Cornell's credit, this fourth issue goes a long way to mitigating the silliness of the premise, and providing a logical sequence of events to lead to such a reveal. Elsewhere this issue is simply nostalgia run gloriously amok as UNIT fights alien robots, the Master runs around doing villainous things, and Mike Yates seems a little uncertain about where his loyalties lie. (3/5)

Jim Zub is back with another Dungeons & Dragons miniseries. These are, it must be said, never the best comic books on the shelves in any given week, but they remain pretty great fun for anybody looking to read a pulpy fantasy adventure with amusing characters and funny dialogue. The character interplay is immediately recognisable to anybody who has played a role-playing game, and in that respect Zub should be commended: this is a pretty accurate adaptation of Dungeons & Dragons. Netho Diaz's detailed artwork is hugely appealing as well, and well coloured by Thiago Ribiero. (3/5)
Posted by Grant at 5:04 PM