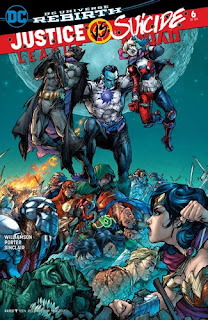 Justice League vs Suicide Squad comes to a slightly rushed end this week. It's a series that put itself in quite a creative bind. The stakes got raised massively in the previous two issues, so much so that I'm not sure any final issue potentially written could have been completely satisfying. From Maxwell Lord stealing the fabled Black Diamond to becoming possessed by its power to the insanely powerful Eclipso being released onto a defenceless world, there was simply not enough room to give such a terrible crisis the attention and story that it deserved.

Instead we get a fairly brief climax with an unexpected saviour, and a neat dove-tailing into Justice League of America, which relaunches in a couple of weeks. It's solid, but it still does not fully satisfy. There is some nice character work in the issue's second half, however, as well as a couple of tantalising threads for future DC storylines.

This final issue was illustrated by Howard Porter, using the looser aesthetic he developed while working on Justice League 3000. It's not the best art the series had, but it's effective enough. This has been a generally entertaining miniseries, taking what could have been a dreadful premise and actually working it into a really fun action storyline. I also really appreciated the weekly schedule, which gave it a momentum and a drive that made it feel like a properly important and gripping story. More miniseries from DC like this would not go awry. (3/5)

History has been changed, and an ascendant Soviet Union controls the Earth of the 21st century. Only special agent Colin King, who in another world was known as Ninjak, seems to realise something has gone wrong. The genius of this miniseries that it operates in two parallel ways. On a superficial level it's almost always fun to see a superhero universe transformed into a new, alternative identity. Beyond that, however, this is a dramatic and smart continuation of Valiant's Divinity series. It's hard to write hugely super-human characters, but Matt Kindt is achieving that here. Trevor Hairsine's artwork is superb too: a welcome commentary at the back of the issue highlights that wonderfully. (4/5)

A fourth and final prologue to next month's Justice League of America relaunch, but also an epilogue to Justice League vs Suicide Squad. After Batman arranges to have Caitlin removed from Amanda Waller's Task Force X, Waller goes out of her way to break Caitlin's resolve in the few days she has left as an inmate of Belle Reve prison. The epilogue nature of this issue makes it feel quite different to the previous three one-shots: there's not a summary of Killer Frost's origins or powers, just a nice character bit to join up her story between one series and the next. These one-shots have been solidly written and nicely illustrated, and while they've been by no means essential they have done a pretty good job of building my interest for JLA come February. It's a strong roster of characters with a lot of potential. (3/5)

The Green Lanterns have teamed up with Starfleet, while Sinestro has taken over the Klingon Empire. It's mad, silly continuity pornography time, as DC Comics and IDW reteam to combine the Green Lantern Corps with the recent movie continuity of Star Trek. I found the first issue simply too ridiculous to enjoy, as it drew in far too many threads from each property and throwing them together like an eight year-old playing with action figures. I had hoped that things might settle down with a second issue, but instead writer Mike Johnson doubles down with both properties. This is just too ridiculous to bother, unless you're desperate to laugh at a crossover series done about as wrongly as one can be done. Angel Hernandez's artwork is rock-solid, but that simply cannot save the book from itself. (1/5)
Posted by Grant at 8:02 PM