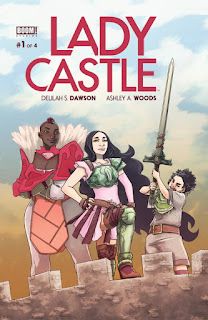 King Mancastle heads out to fight monsters, only to get himself killed - along with all but one of his knights - at the first dragon he meets. Now the blacksmith's wife Merinor is declared king, the tower-imprisoned princess Aeve is the new guard captain, and it's up to the remaining women of the newly renamed Ladycastle must prepare for the approaching onslaught of monsters and fantasy beasts charging their way.

Ladycastle has an amusing premise, and great artwork by Ashley A. Woods. The colouring is soft and delicate, and the character designs distinctive and appealing. It also subverts a few expectations: it's not the king's daughter that is declared king, but rather the blacksmith's wife. The princess, who's never wanted to be royalty, seems much happier grabbing a sword and preparing for battle.

That said, there's something very slightly disappointing about this first issue. I think I wanted something a lot more openly funny from this set-up, and writer Delilah S. Dawson appears to want to have her cake and eat it too. The book feels humorous in parts, but other sections fall a little flat. It feels flabby, which is not a reaction you likely want from readers for your first issue. This is a four-issue miniseries, however, so there are three more issues for the series to pick up. (3/5)

"Men of Steel" comes to a climax, as Lex Luthor and a de-powered Superman make their last stand against the aliens Zade and L'Call. Segovia's artwork is great, with a nice sense of momentum to the action scenes. Dan Jurgen's script leaves plenty of room for character as well, as Superman and Luthor are finally forced to trust one another and actually give each other a chance to prove themselves. Being back writing Superman comics suits Jurgens well: this is the best stuff I've seen him do in years. (4/5)

Barbara Gordon returns to Burnside to find it even more gentrified, people trying to force the homeless out of the suburb, and her rent doubled. At a party she meets an attractive young man named Ethan Cobblepot - the previously unmentioned son of the Penguin. After a fairly unimpressive initial arc, Hope Larson's Batgirl run picks up considerably with this return to Gotham City. The introduction of the Penguin's son is intriguing, and I really like Chris Wildgoose's crisp, slightly exaggerated art style. (3/5)

"Batwoman Begins" as Kate Kane's first face-to-face encounter with Batman is recounted in flashback, and in the present they must work together to stop a rogue Colony operative from stealing a cannister of monster venom. It's all a lead-in to the monthly Batwoman series starting in February, but to its credit it feels like an organic extension of the storyline so far in Detective Comics. Ben Oliver's art is great, although it's a shame its broken for two pages by fill-in art from Szymon Kudranksi - not bad, but distracting. This is a great mini-climax, tying up some things and opening doors for subsequent stories. (4/5)

Stephen Strange was almost completely depowered fighting Imperakul, then he was unexpectedly challenged by Baron Mordo, Mister Misery and the Orb. Now his arch-nemesis, the demon Darmammu, arrived to finish him off. This slightly shaky, uneven arc has its strongest issue here as it ends, with a tighter and more entertaining script by Aaron and slightly tidier and more readable art and layouts by Bachalo and his ridiculously large support crew of inkers and colourists. Despite the improvements I still feel this book would benefit from a cleaner, more comprehensible artist team. (3/5)

One of the advantages of a self-contained, creator-owned comic series is that when you decide your story should end, you're free to go balls-to-the-wall on the final climactic issues. Revival ends next month, and that means this issue is a fast-run, desperate sprint towards the final chance for Em Cypress to save the world. Characters die in sudden, deeply awful ways, Tragedy is everywhere. Stakes are raised to their highest point. Tim Seeley's script is as strong as it has been for the past four and a half years. Mike Norton's artwork has been nothing but superb. Only a few weeks to go, and the story ends forever. On the one hand I don't want it to go. On the other, it looks set to be truly sensational when it does. (5/5)
Posted by Grant at 10:56 PM