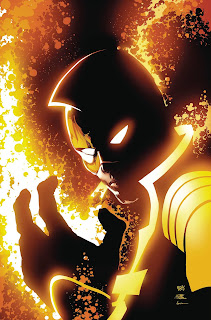 So I read comic books as a child, like most children do: mainly British comedic books like Nutty and Whizzer & Chips. I did read American comics when I got my hands on them, though - usually anything involving Batman or The Incredible Hulk. In my teenage years I got back into them around the time that Image Comics was launched, and I've stayed interested in comics in a big way ever since. There were basically three comics that captured my interest at that time: Todd McFarlane's brand-new, wonderfully ridiculous Spawn, Alan Grant and Norm Breyfogle's excellent run on Batman, and The Ray: a six-issue miniseries by Jack H. Harris and Joe Quesada. It rebooted an old DC superhero for the 1990s, and now 25 years later DC is rebooting him again in the one-shot Justice League of America: The Ray Rebirth #1.

For an introduction to a revised character it is simple, direct and pretty entertaining. Ray Terrill, aka the Ray, has been redeveloped a little. He's gay now, and his power set has been advanced and expanded somewhat. Now he can fly, shoot light, create illusions and make both himself and other invisible. Thankfully his iconic appearance remains: I always thought the Ray Terrill version of the character looked the best out of all the versions over the decades.

Having now read the introductions for the Ray, Vixen and the Atom, I have to say the forthcoming Justice League of America is shaping up to have a pretty inventive line-up of characters. This has been a good stunt by DC to publish these one-shot prologues. (3/5)

Under the cut: reviews of Batman, Green Arrow, Justice League vs Suicide Squad and Superman.

Batman and Catwoman had agreed to spend one last night together on Gotham's rooftops before she voluntarily returned to prison for the murder of 237 people. Now she has gone on the run, and finding where she has gone will lead Batman to the truth behind those 237 deaths. Mitch Gerads' artwork is sensational: he is a great fit for Batman and matches Tom King's scripts perfectly. The story is great. It is smart, mature and beautifully succinct. Other writers might stretch this storyline out to four or five issues, but King manages to compress it elegantly to just two. It solidifies and enhances the relationship between Bruce and Selina for DC Rebirth, answers a big question left over from the "I Am Suicide" story arc, and opens up some great opportunities for future stories. (5/5)

The secret archer attempting to frame Green Arrow might have been uncovered, but there is still the problem of corrupt cop-turned-brutal vigilante Sergeant Notting. "Emerald Outlaw" continues with this brilliantly paced and laid-out action sequence, which pits Notting's so-called Vigilante Murder Squad against both the Seattle police department and Green Arrow's own vigilante team. Juan Ferreyra's artwork is rich and dramatic with a vivid use of colour. There is a tremendous sense of momentum going from panel to panel. It's great to see DC get Green Arrow done so wonderfully in DC Rebirth: he's a great character who deserves it. (5/5)

Marvel should note that DC has almost completed a major event series over six weeks to dovetail into a major relaunch of Justice League of America, alongside four separate prologue one-shots, and everything has been released on schedule at a reasonable price point with no delays. This fifth issue continues the narrative in its unexpected new direction: most of the Justice League has become possessed by the infamous black diamond. It took minutes for them to take over and protect the USA under Maxwell Lord's orders. Now Batman and the remains of the Suicide Squad are left to save the world. There's great interplay between characters, a nice use of DC Comics history, and an inevitable cliffhanger climax that is going to put a hell of a lot of pressure onto next week's finale to match expectations. This is a superhero event done right. (4/5)

There's something of an artists' jam session going on in this issue: I honestly don't know if it's a deliberate attempt to distinguish all of the parallel Earths that Superman visits or if this issue was just running really late. This issue should hold a lot of appeal to fans of Grant Morrison's Final Crisis and Multiplicity, although for me it's all feeling a bit rushed and messy. A storyline in which a dimension-hopping villain is kidnapping the Superman of each parallel Earth has a lot of merit, but unlike the elegant simplicity of King's Batman this just feels a bit overloaded and confused. The story demands room to breathe and to let all of the different Supermen stand out from one another. (3/5)
Posted by Grant at 8:43 PM