Yowamushi Pedal: "I Want to Catch Up!" 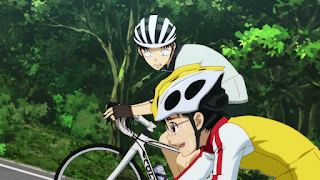 It is 18 November 2013, and time for the seventh episode of Yowamushi Pedal.

Armed with a proper racing bike for the first time, Onoda sets off in an attempt to close a near-impossible eight-minute lead and catch up with Imaizumi and Naruko. As the race begins to snake up the side of a mountain, it may be too difficult a task for Onoda to achieve. Meanwhile up ahead Imaizumi and Naruko have an unexpected encounter with a mysterious Frenchman.

So Yowamushi Pedal is a slow-paced series, with racing sequences that appear to be more or less occurring in real time. This cycling club welcome race for the first year students kicked off two episodes ago, ran all through the last episode, and is barely halfway through by the end of this one. I had a sneaky glance ahead and confirmed that the entire race, including the preparations, takes a full five episodes to play out. That's not even a championship race: it's simply the first race for new students.

The thing is, a slow pace is not a problem so long as something worthwhile is presented at the same time. In the case of Yowamushi Pedal there is a huge amount of suspense and drama to found in the moment-by-moment progression of the race. What's more, by spending several episodes introducing key characters, the series has effectively demanded an audience buy-in: we care about these high schoolers now, and are invested in seeing them succeed.

The weird plot distortions that damaged the previous episode are out of the way here. Onoda has his loaner bicycle, and is desperate to catch up with his friends. The episode highlights his infectious optimism: he doesn't want to race his friends because he wants to win, he races them because he finds it fun. He was starved for friendship at the beginning of the series, and now he has several friends. It is nice to watch something that is so upbeat and optimistic.

The episode also builds a new relationship, between Onoda and the club captain Shingo Kinjou. While Kinjou clearly has a fairly blunt edge to him, it's immediately obvious he is intrigued by Onoda's basic talents and dogged determination. It's Kinjou who makes it clear to Onoda that he has a choice: stay the course, don't catch up with his friends but come third in the race, or accelerate uphill, catch up with them but burn out from exhaustion before the race is done. Onoda, being Onoda, goes for catching up with Imaizumi and Naruko: riding is more important to him than winning, and that actually seems to impress Kinjou. He's a nicely different character to the other regulars to whom we've been introduced.

Up ahead, Imaizumi and Naruko have a weird encounter with an overweight smiling European named Mr Pierre. It's a brief, somewhat odd scene. He is later revealed as the club's couch - and an English teacher at the school.

This is a simple episode, but it is also a rather satisfying one. There's nothing here that is unbelievable or irritating, no poorly considered plot developments or twists. It is just likeable characters racing up a mountain. Not the most urgent or dramatic half hour of anime ever made, but a very entertaining one nonetheless. Seven episodes in, and five have been good. The quality ratio rises back up to 71 per cent.
Posted by Grant at 10:04 AM