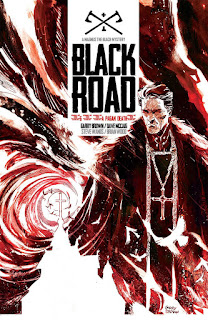 Black Road has returned with a new story arc. Magnus the Black has been betrayed by Julia, but now finds himself allied with the lethal mercenary Kitta to infiltrate the northern walled town of Oakenfort and murder its bishop.

Some years ago Brian Wood wrote an exceptional historical series for DC Vertigo titled Northlanders, which told self-contained stories about vikings across several centuries. It was a stunning, impeccably researched series, and it is fabulous to see him back working in that area once again. Black Road is a much pulpier, exaggerated sort of a comic, but that's a deliberate choice and it is resulting in a very different kind of viking story. Magnus is a great character, and Kitta is shaping up to be pretty solid as well.

Garry Brown's artwork, paired by Dave McCaig's colours, enhances the drama through powerful character designs and massive, bleak landscapes. Wood and Brown did outstanding work together on The Massive and Ninth Wave, and it is really great to see this immensely talented partnership continue with a new set of characters. Image has had so much success in recent years with science fiction comics; I reckon historical comics could easily be their next big thing - so long as they can find a few more titles as strong as this one. (5/5)

Under the cut: reviews of Aquaman, Descender, Doctor Aphra and Spider-Gwen.

"The Deluge" hits its climax, as Aquaman finally tracks down the head of the secret organisation NEMO - his arch-enemy Black Manta - and stops his inciting war between Atlantis and the USA once and for all. It's pretty much exactly what you want from a story finale: action, drama, and a wrapping-up of plot with some tantalising threads left hanging for subsequent storylines. Briones and Faucher provide great art, and Dan Abnett's script keep things rattling along at a great pace. This might also be your last chance to see outgoing US President Barack Obama in a superhero comic. (4/5)

Now that the relatively slow story arc of character back stories is out of the way, Descender has picked up wonderfully. This issue is a breakneck race between multiple storylines on different planets, culminating in one of the best cliffhangers I have seen in a while. One aspect of the series I have really enjoyed but never specifically praised is the character designs: everybody looks distinct, appealing and original. Dustin Nguyen is doing fantastic work here. His style here is unlike anything else on the shelves. (4/5)

Aphra and her father continue their search for an ancient alien tomb on Yavin IV, despite the planet being overrun by Imperial soldiers in the wake of the Death Star's destruction. There's a nice use of Star Wars continuity here, including a reference to the recently released film Rogue One, that helps to situate these fresh characters into the film universe quite smoothly. This is a crowd-pleasing issue: Aphra gets to work out some of her frustrations with her pious father, her homicidal droids get to do some espionage work, and Wookiee bounty hunter Black Krrsantan gets to take out a number of Stormtroopers as a diversion. I like how Marvel has successfully expanded its Star Wars line beyond the movie characters: it's a first step into a brighter world. (4/5)

A crossover with Spider-Men has led me for the first time to "Spider-Gwen": an alternative universe Spider-Woman where it was Gwen Stacy that was bitten by a radioactive spider and Peter Parker who got to die. It is a weird conceit for an ongoing comic and character, and in this issue at least it all feels a little undercooked and pointless. The interplay between Gwen and Miles is enjoyable enough, as is a guest appearance by an unscrupulous parallel universe Matt Murdock, but it does all feel a little superfluous and silly. (3/5)
Posted by Grant at 7:31 AM