Star Trek: The Next Generation: "A Fistful of Datas"

It is 9 November 1992 and time for another episode of Star Trek: The Next Generation. 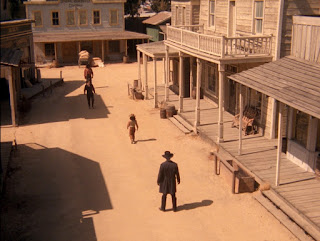 Alexander (Brian Bonsall) drags his father Worf (Michael Dorn) onto the holodeck to play a wild west simulation. At the same time La Forge (LeVar Burton) and Data (Brent Spiner) attempt to interface Data's own positronic net with the Enterprise's computer systems. Something goes wrong: out in the real world Data begins to exhibit signs of Alexander's western game, and inside the holodeck the virtual characters all start turning into Data.

Season 6 must have been 'silly season' for the Star Trek: The Next Generation writers room. No sooner have we gone through Enterprise crew members being transformed into children that we're presented with this: Worf, Troi and Alexander playing at westerns in the holodeck, with Brent Spiner playing an entire town full of characters. It is ridiculous; in fact it's likely the most ridiculous holodeck-based episode so far. Somehow, and much like "Rascals" the previous week, "A Fistful of Datas" overcomes the stupidity of its premise and winds up being a remarkably funny and entertaining episodes.

The use of the holodeck malfunctioning as a storytelling trope has, by this stage, been well run into the ground. People's lives are put in jeopardy so many times from the technology that it is insensible that Starfleet would continue to allow its use. In practice it's a tool to let the series play dress-ups once a season or so, whether it's Data playing at Sherlock Holmes or Picard pretending to be a hard-boiled detective. Worf playing a cowboys with his son is probably the most charming example of them all. Of course a child would want to use a holodeck to play make-believe, and contrasting the serious, stoic Worf with a child's adventure is an inspired creative choice. So yes, holodeck episodes are a tedious thing, and yes they are horribly over-used. In this case, however, the trope is perfect.

Michael Dorn is outstanding at playing up the comedy of Worf, who knows nothing of American folklore, attempting to play the sheriff of a small 19th century town. It is great to see him playing the part of sheriff purely to please his son. Season 5 showed Worf's shortcomings as a father several times. "A Fistful of Datas" shows off just what a wonderful father he's really become.

Brent Spiner does a serviceable job playing a variety of roles, but by virtue of the script they're all a little broad - and he then plays them much more broadly again. Whether it was his choice, or that of his director Patrick Stewart, it overplays the gag a little. Much more entertaining is Marina Sirtis as Troi, who joins Worf and Alexander's game as the mysterious gunslinger from out of town. It's a great opportunity for the character to demonstrate a more playful side, and further cements the relationship between her and Worf, two characters who really did not interact that much before Alexander came on the scene.

This is a fun episode that is knowingly ridiculous, and playful when it comes to its various western cliches. It may be a little uneven in the middle, but the concept works surprisingly well, and its final scenes are just sublime. It's the fifth good episode out of eight so far, giving Season 6 a current quality ratio of 63 per cent.
Posted by Grant at 7:46 AM