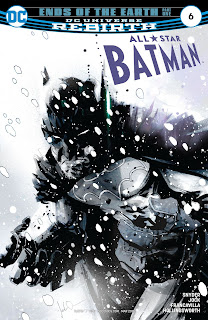 The first five-issue story arc of All-Star Batman had been entertained, but also questioning the book's general purpose. Written by Scott Snyder, it simply felt like another five issues of his lengthy Batman run. Thankfully with this sixth issue we get something genuinely different and, to be honest, rather artful.

In this issue Batman tracks down Mr Freeze to prevent his latest insane plan to punish the world for his wife's near-death: releasing a long-frozen virus from beneath the Earth's perma-frost. The big difference in this case is that the story is related not through dialogue but through prose. It gives the entire issue a strange, artful feel and tone. The turn of phrase is just beautiful to read, with a near poetic rhythm to it. That is all accompanied by excellent art by Jock, the artist with whom Snyder did a tremendously good run on Detective Comics ("The Black Mirror") shortly before the New 52 started.

In a short back-up strip, Duke Thomas continues his training under Batman in a great little storyline illustrated by Francesco Francavilla. I adore Francavilla's artwork, so it's great to see him contributing a few pages to this series.

I'm not sure where this new lead arc "Ends of the Earth" is going, or if the prose style is going to continue, but even taken as a done-in-one single issue this is pretty remarkable stuff. (5/5)

Under the cut: reviews of Action Comics, Batgirl and the Birds of Prey, Doctor Who: The 11th Doctor, Justice League of America: Vixen, and Justice League vs Suicide Squad.

Superman and Lex Luthor are on a planet somewhere on the other side of the galaxy, where Luthor has been condemned to death over a potential future where he replaces Darkseid as the ultimate evil in the universe. Meanwhile Lois Lane is tracking down clues at the Daily Planet with her son Jonathan in tow. This is fast-paced, action packed superhero stuff, and it continues to be great seeing Dan Jurgens bring his A-game as a writer in a way I don't recall him showing off since the early 1990s. Segovia and Thibert's artwork is rock-solid. The story is interesting, and weaves both the current arc and the long-running subplots equally well. This book really is exactly what I want in a Superman comic. (4/5)

Batgirl and the Birds of Prey #6

The first storyline hits its climax as Huntress faces down against the crime lord she has been tracking down for so long - her own mother. The good qualities that have made this book so fun to read continue apace: strong characters, funny dialogue and solid vigilante action. I am still not entirely convinced about the new Oracle, but the end of this issue makes it clear that there is a lot left to learn about him - I'm happy to wait and see. (3/5)

It's an all-new year for Titan's 11th Doctor comic, and that means the beginning of a fresh volume (the third) and a brand-new story arc. After a pitch-perfect cold open filled with British political satire, it's a jump over to an old friend's funeral and a clue to what the Doctor knows is a trap but which he cannot resist anyway. It's a solid and intriguing opening, with stylised artwork by I.N.J. Culbard giving things a very distinctive and unusual look. Last year's epic storyline was great - I really hope this year's can match it. (3/5)

DC's lead-up to the new Justice League of America continues with this fresh origin one-shot based around Vixen, an African superhero who can draw on the powers of animals around the world. Like last week's The Atom Rebirth one-shot, it is a little short and simple, but it does a reasonably job of setting the character up and making both her super-powers and back story clear so that next month the new League book can hit the ground running. Jamal Campbell's artwork is very good. I don't recall seeing Campbell's work before, but I'll be keeping an eye out for it from now on. (3/5)

Since the last issue was all about plot points and set-ups, this fourth issue gets to largely contain wall to wall action as Maxwell Lord's team of super-powered villains takes on the combined Justice League and Suicide Squad. Artist Fernando Pasarin does a great job with the various hero-versus-villain smackdowns, with good inks by Matt Ryan and superb colouring by Sinclaie and Skipper. Lord's target seemed to be Amanda Waller herself, but it turns out that was just what he was telling his team. His real target is a surprise revelation in the final pages that may confuses new readers a little while sending long-term DC fans through the roof. Well played, DC. Well played. (4/5)
Posted by Grant at 11:40 AM