Izetta: The Last Witch: "The Sword in the Heavens" 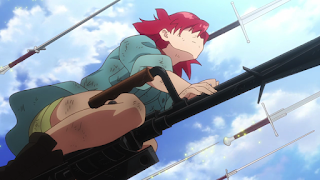 On the front lines of Coenenberg, the Eylstadt army makes a final stand to prevent an invasion by the Germanian forces. They have no hope of success, and are simply buying time so that civilians may evacuate the area. Izetta wants to help, but Finé forbids her involvement; will Izetta obey?

It would be a pretty boring episode if she did: "The Sword in the Heavens" matches the first episode of Izetta: The Last Witch with tremendously exciting action sequences and emotive war drama. It manages to pack quite a lot into 25 minutes, and does a generally great job of it too.

The episode begins with a close focus on Jonas, a young private in the Eylstadt army. It is a great dramatic choice, because we get to see the battle from his point of view: the nervous build-up, the panic of seeing tanks advance and begins bombarding the trenches, the chaos of an air raid, and so on. The sequence refuses to pull punches. People die, and die horribly. It is all abstracted to an extent - that's an automatic result of being animated - but it brings a hell of a punch with it.

It is good to see Finé assuming a leadership role with such competence and gravitas. She commands the troops from a nearby fortress, and shows an ability not only to lead the troops but also be open to counsel and advice. She also continues to show sisterly affection to Izetta: the latter wishes to help the war effort, but Finé does not want to see her risk her life unnecessarily. She is, after all, the last witch left in Eystadt.

When Izetta defies her orders to goes to save the Coenenberg soldiers, it is will a jaw-dropping sense of bravado. She's surrounded by an enchanted mass of medieval swords and lances taken from the fortress. They whiz and swirl. They block machine-gun fire and destroy aeroplanes. Izetta's powers allow her to literally flip and hurl tanks through the air. It is a huge destructive scene, which also makes it hugely cathartic to watch. Now that she has revealed herself to the Germanians in such an open fashion, it will be interesting to see how they will respond.

There is one downside to the episode, and it is one I have mentioned before: the fan service. Even the opening credit include egregious shots of Izetta's naked body without any real purpose or justification. It sours the episode around the edges, and given that it's happened before I suspect this is an issue that is going to dog the series for all 12 episodes. Nonetheless, while it may damage the periphery of the episode it does not currently dampen the central action. This is an exciting and dramatic half-hour, maintaining the series' quality ratio of 100 per cent.
Posted by Grant at 12:39 PM