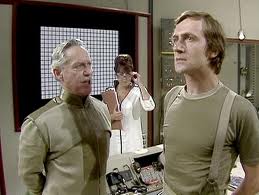 Who50 counts down to the 50th anniversary of Doctor Who by reviewing my favourite episodes and serials over the history of the programme, counting down from #50 to #1. Today, #15: "Kinda", a 1982 four-part serial written by Christopher Bailey and directed by Peter Grimwade.

I was never particularly scared of Doctor Who as a child. There was one story, which we will get to in a few weeks, that gave me nightmares, but generally I never found it a particularly frightening show. Thrilling, certainly, and often very tense, but never actually scary. There were a few other exceptions, however, and here's one: a military officer driven out of his mind, clutching a cardboard cut-out man in his hand as he screams at the Doctor that 'you can't mend people!!' It doesn't involve a monster in a rubber suit, or a giant maggot or spider, and yet it's always been one of the most frightening moments I've encountered in Doctor Who's long history. It's frightening because, unlike Daleks, Cybermen and Zygons, paranoia is real. Mental illness is real. Hindle (Simon Rouse) progressively goes out of his mind while retaining a position of authority, and for once there's precious little the Doctor can do.

"Kinda" is a strange story. It's one of the most adult works of science fiction Doctor Who ever had. It's complex, strange and rich in symbolism, inspired by Buddhism as well as (arguably) Ursula K. Le Guin's The Word for World is Forest. Its writer, Christopher Bailey, came out of nowhere to write it and its sequel "Snakedance", and then popped back into obscurity. Despite writing two of the best Doctor Who serials of all time, he never wrote for television again.

The plot, in as much of a nutshell as I can manage: the TARDIS arrives on a forest planet named Deva Loka. A small human expedition has been assessing the planet for potential colonisation, however for months members of the team have been going missing and the remaining three staff are close to breaking point. While the Doctor and Adric explore, Tegan falls asleep among a strange set of crystal wind chimes. When she awakes, she has been possessed by a malevolent spirit named the Mara - which seeks to destroy the peaceful world of Deva Loka and it's inhabitants, the Kinda. The Doctor and Adric are unable to help Tegan, however, as they have been imprisoned within the Earth expedition by one of its crew, Hindle, who has been overcome by the growing pressure and had a mental breakdown.

Separate to the bulk of the story is a lengthy dream sequence in which Tegan is challenged, taunted and ultimately overcome by the Mara. It's something straight out of Samuel Beckett: surreal, symbolic and oddly hypnotic. It's a very bold risk, and one that pays off marvellously - thanks in no small part to Lee Cornes' performance as one of the Mara's manifestations.

Peter Davison's first season as the Doctor got off to a fairly shaky start: "Castrovalva" was a bit wobbly, and oddly structured, while "Four to Doomsday" was straight-out dire. "Kinda" must have come as a tremendous relief to some viewers - proof that Doctor Who could still knock the ball out of the park when it needed to, and provide the kinds of stories that no other TV series in Britain could.
Posted by Grant at 9:35 AM