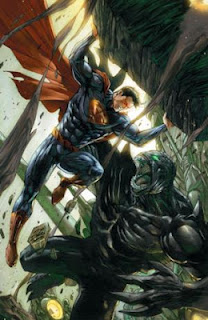 DC's Superman books got an enormous shot in the arm in June. Timed to coincide with the release of Warner Bros' Man of Steel were not one but two all-new monthly titles: Superman Unchained (by fan favourites Scott Snyder and Jim Lee) and Batman/Superman (by more fan favourites, Greg Pak and Jae Lee). Superman Unchained did particularly well; given it's US$4.99 price tag, that one issue grossed more than US$1.25m alone.

Batman/Superman (not to be confused with pre-New 52 title Superman/Batman) also did incredibly well, although in both cases I expect sales to drop pretty sharply over the next few months. DC have already announced Superman/Wonder Woman for October, so personally I'm hoping they also announce Wonder Woman/Batman so as to make the circle complete.

The bigger issue I can see, however, is with Superman's other monthly titles.

Let's start with Action Comics, the book that should be Superman's flagship title. June saw the publication of its 925th monthly issue (albeit only the 21st if you read the cover). When relaunched in September 2011 it shipped more than 200,000 copies. Less than two years later its down 77% to less than 47,000. Compare that to Justice League (debuted with 256,000, now down 63% to 94,000) or Batman (debuted with 188,000, now down 25% to 142,000). First of all, Grant Morrison's 19-issue run was unfocused as hell and vaguely unenthusiastic. Then the widely publicized Andy Diggle run lasted precisely one issue before he quit the book. Now the book's in an apparent limbo with no real direction of which to speak. If there's a New 52 book in urgent need of a high profile relaunch with top notch talent it's this one.

Superman is also under-performing, although there's a good argument to be made that - like Detective Comics - it wasn't served by good writing from the relaunch onwards. Its sales have dropped 25% over the past year to just 44,285 copies in June; just 5% below Action Comics. Remember that a year ago it sold 27% below Action, which only drives home just how badly Action has been doing.

Supergirl and Superboy are both selling in the low 20,000s: certainly Supergirl is selling better at 25,856 in June compared to 20,952, but neither book is selling at the level it probably should be. Superboy is of particular concern, as it's one of the few New 52 titles that's actually selling less copies per month than it was a few months before the New 52 kicked in. A relaunch/rejigging would seem to be in order - or cancellation. Do we need a Superboy monthly?