Under the Dome: "Manhunt" 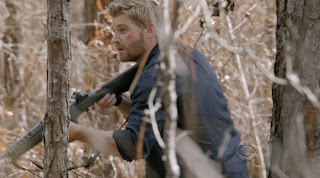 With a former police officer armed and on the run, Big Jim and Barbie team up to take the rogue officer down. Meanwhile, Junior goes looking for a way out of the dome, and Joe and Norrie make a connection.

I don't know if this is a deliberate creative decision, but each of the three episodes of Under the Dome so far have taken place over one day of story. This is making it already feel excruciatingly drawn out, particularly when a lot of time in this episode is devoted to Jim Rennie Jr's cartoon-like mental illness. I want things to speed up: I know Under the Dome was a long novel, but things could be tightened up so much without damaging the narrative.

A big problem the series is already facing is how it's representing the town. We've lost three police officers in three episodes now, teenagers are visibly running amok, we've got the mayor hiding his drug factory and the mayor's son going bonkers while kidnapping his ex-girlfriend. Last episode a building burned down and everybody saw a man get shot in the street. Look out around the extras here, though?

It's as if the show is concentrating so hard on the actions of its lead characters that it's forgotten to illustrate the world around them. Chester's Mill should be turning in on itself after three days. Instead it looks like, for the most part, the residents simply aren't that fussed.

There was some stuff I liked. The growing attraction between Joe and Norrie felt pretty natural, although the weird school bullying incident in Joe's living room didn't at all. The Simpsons Movie reference was a stroke of genius. Mike Vogel is a very appealing lead as Barbie, as is Rachel Lefevre as Julia. There's some nice character work between Big Jim (Dean Norris) and his son Junior (Alexander Koch). A lovely moment for Linda Esquivel (Natalie Martinez) as she takes on her dead friend's role as Sheriff and takes on his hat as well. Asides from that? It was, for the most part, pretty formulaic and boring.