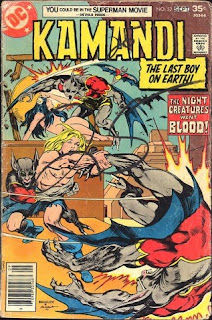 It's Kamandi: The Last Boy on Earth! After co-creating a raft of incredibly famous characters for Marvel Comics, writer/artist Jack Kirby defected across the street to DC, where he created another raft of characters - not anywhere near as famous, but possibly more original. Kamandi is a case in point: a young man with long blonde hair and ragged blue trousers who lives on a far future Earth where all of the other humans have either died or regressed to primitive savagery. Meanwhile many other animals have evolved into sophisticated, humanoid forms.

I bought an old copy of Kamandi #52 today. It comes towards the end of the title's run, which went from 1972 to 1978. The first 37 issues were written and drawn by Kirby, but after he quit working for DC the book continued with other writers and artists. This issue is by writer Jack C. Harris and artists Dick Ayers and Alfredo Alcala. It's really enjoyable. It's also bloody weird.

Okay, let's see if this all makes sense: after fending off an attack by giant bats that wear blue pirate boots Kamandi and his psychic girlfriend Spirit head off into the jungle to rescue his friend Ben, who was taken by silver mutants after he was injured in the previous issue. They accidentally trespass in the territory of a civilization of talking Inca-worshipping toucans and sentenced to be executed. Meanwhile a cabal of talking anthropomorphic animals - led by a cigar smoking snake - hire a pair of humanoid dogs inspired by Sherlock Holmes and John Watson to track Kamandi down and kill him.

So basically this comic is nuts. It's delightfully bizarre, throwing in all manner of incongruous characters without any real regard towards realism or any sort of unified fictional world. It's simply all-out fun and adventure. I get the impression that nothing was barred from this book: had Harris wanted to write an issue about hyper-intelligent telephones riding into Kamandi's territory on giant flamingos, then that's exactly what Ayers and Alcala would have drawn.

It's hard to imagine a comic like this getting published today. Contemporary readers demand more consistency and logic than this. As a historical artefact, however, it was pretty damned entertaining.
Posted by Grant at 11:36 PM