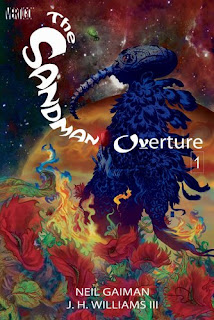 When DC Comics let Vertigo editor-in-chief Karen Berger go, many people - myself included - foresaw the impending end of the imprint. Sales were down, books were getting cancelled and the only continuing series Vertigo seemed to have left were Fables and The Unwritten. Maybe we were a little premature in calling that death. Long-term Vertigo editor Shelley Bond has taken the top seat and appears to be jumping in all guns blazing.

Scott Snyder and Sean Murphy's The Wake, a 10-part miniseries, launched with the highest sales of a Vertigo title in a decade. The Sandman Overture, a 6-part bimonthly prequel to Vertigo's biggest-ever hit, launches in October. In recent weeks a string of new miniseries and ongoings have been announced, including Ian Edginton's Hinterland, Peter Milligan's The Disciple and Toby Litt's The Dead Boy Detectives (a Sandman spin-off). Meanwhile the back catalogue is getting nicely brushed off and repackaged, with thicker, better-value collected editions getting released for Hellblazer, Lucifer, Preacher and (in early 2014) The Invisibles.

Vertigo used to be the best place to find mature-readers fantasy and horror comic books in the USA. Hopefully in 2014 this will be the case again.

It's been an interminably long wait, but Batman finally faces off against his son's murderer. It's as hard-hitting and violent a showdown as you might expect, one that's capped off by a truly horrific finale where Talia's perfect assassin is finally unmasked. With only one issue left to complete Morrison's enormous multi-year epic - surely the longest Batman storyline of all time - it's difficult to see how everything is going to be resolved. I suppose, however, that this is part of the fun. (5/5)

So DC gave Batwing his own book two years ago, which impressed me greatly because it was a superhero book about an African superhero fighting crime in Africa - and that seemed a nicely progressive and interesting thing to do. Then the sales dropped pretty hard, and so DC hired Gray and Palmiotti to do a relaunch. They replaced the African protagonist with an American one, which irritated me. Now the book's not even taking place in Africa: this issue sees Luke Fox teaming up with Batman in Gotham City. This is the point where we should ask DC: 'Why bother?' There's no reason for this book to exist any more, either creative or commercial. (1/5)

A girl lies in a hospital, waiting for a heart transplant that will save her life. The helicopter carrying the heart has crashed in the biggest snow storm in New York history. Daredevil is out in the snow, doing his best to find the heart in time. This is an excellent, old-fashioned and well-paced Daredevil story. Lee Weeks is creating a fantastic three-part adventure in the vein of the classic Miller/Mazzuccheli books of the 1980s. Why this three-part story is included as part of an eight-part miniseries is beyond me, but if that's what it took for Marvel to give me this story then I'll live with it. This is sensational stuff. (4/5)

John Layman is writing a brilliant run on Detective Comics, one that's being regularly overshadowed by Scott Snyder's widely publicised work on Batman. If you stopped reading Detective (or 'Tec, as the cool Bat-kids call it) because the New 52 writing was rather awful, you really should give it another chance. A new storyline kicks in this issue, with Batman on the trail of the mysterious Wraith while Bruce Wayne fights a takeover attempt of Wayne Enterprises. The Wraith is an old Batman villain being giving a makeover - I love the new design, which is showcased on a great cover by Jason Fabok (who's also doing sterling work on this book). (4/5)

The conclusion of this five-issue miniseries was known before it began, since the Japanese story that it retells is so widely known and respected. Rather than spoil this issue, however, that knowledge enhances it. There is a sense of tragic inevitability about what Richardson and Sakai present here, and it's portrayed with sensitivity, gravitas and overwhelming dignity. The final page is a masterstroke and hit me dead centre. This series has not put a foot wrong: outstanding art and layout (Lone Wolf and Cub's Kazuo Koike was an adviser) combined with a beautiful adaptation of the original legend has made this the best American-published comic book of 2013 so far. I try not to use the word too often so that when I do use it, you know that I mean it: 47 Ronin is a masterpiece. (5/5)

We're two issues in, and I am really enjoying Venditti's fresh run on Green Lantern, a book that had - until June - been under the control of Geoff Johns for about a decade. There's something nice and unassuming about this book, despite its massive extended cast. Some times you want to read a superhero comic that challenges you, or stretches its limits, or does some massive epic storyline. Some times you just want a book that's a pleasant, enjoyable read. At the moment Green Lantern is the latter kind of book - and after a decade of epic crossover after epic crossover I think that may be just what this book needs. (4/5)

This book isn't quite gelling with me. It was going very well for the first two issues, but a showdown with a witch during this third part's first half muddies the waters somewhat. I found my attention wandering, and I was failing to remember which character was which and what their powers or schticks were. There's a good premise for a comic here, and one that reminds me quite a lot of Gerard Jones and Mike Parobeck's El Diablo. With only 20 pages per issue now, things need to be a lot more focused than they currently are. The content is still good, but it needs to be presented in a better way. (2/5)

The brief run for Red She-Hulk concludes with this, the final part of "Route 616". Betty and Machine Man are lost in an alternative history while She-Hulk and Man-Thing do their best to rescue them. The conclusion feels a bit truncated, which I wonder is an effect of Marvel cancelling the book. It ends in a hopeful fashion, with an apparently team book coming up including both She-Hulks, Machine Man, Man-Thing and Nicola Tesla. Sounds good to me, so long as Parker and Pagulayan are coming along for the ride. (4/5)

This is another book that, like Batwing, was crashing in the sales and received a bizarre revamp by DC rather than the straight cancellation it probably should have received. It's... ehhh. There's nothing I can point to in this issue that's actively bad, but it is inactively pointless. I have no idea what to make of this book. Half the cast randomly changed at the start of this new arc, and the characters who remained are completely different and utterly generic. I think it's time to quit buying this book: DC clearly don't care, so why should I? (2/5)

David Haller sets off to the United Kingdom in order to prevent the next threat to mutantkind, which means a nice set of cameos for fans of Marvel's brilliant Captain Britain and MI:13 and a face-to-face between David and the UK's premier snarky mutant Pete Wisdom. There's a bit of a loss of momentum with this issue, which is always a risk when you've just finished one story arc and have to kick off another. Hopefully things will tighten up a little next month (or next week, or whenever Marvel pushes another issue of this book out - 13 issues in 7 1/2 months is a ridiculous schedule). (3/5)