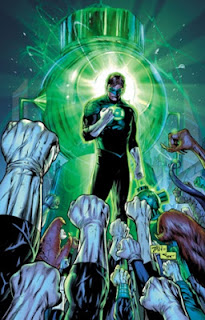 While I read through my enormous stack of new comics for this week's Pull List column, let's have a look at how DC's Green Lantern franchise went in June - it was an important month for them. June 2013 saw a complete shake-up of DC's four Lantern titles with all-new creative teams and, in the case of Green Lantern itself, the first new writer in about a decade. DC also took the opportunity to add a fifth book to the line, dedicated to Orange Lantern Larfleeze.

Geoff Johns' legacy on Green Lantern is enormously impressive, because he leaves it with not just one successful book but four. He managed to transform a sometimes-popular superhero comic into an honest-to-god franchise. It even got its own high budget Hollywood movie (although, if you've seen that movie, you understand it's not actually a very good one). This leaves the new creative teams with a tremendous challenge to keep interest high on these books and keep them selling.

Green Lantern saw a 7% bump in sales, which isn't too shabby on first inspection. That equates to about 4,500 new readers. On the other hand, compare it to June 2012 and it's still 11% down. The conclusion of Johns' epic run was marred by epic storyline fatigue, with "The Rise of the Third Army" segueing into "The Wrath of the First Lantern" so seamlessly that it was hard to tell which epic was taking place at any given time. Hopefully new writer Robert Vendetti can build the audience up again in the coming months - certainly the new book is entertaining enough.

Green Lantern Corps saw a 6% bump, and is actually up 2% compared to June 2012. New Guardians, always the third most popular of the core Lantern books, saw a 4% bump. It's down 5% compared to last year. I've never quite seen the need for New Guardians, and I do wonder if the only people who are buying it are buying the other key Lantern books as well. It strikes me as the Batman: The Dark Knight of the Green Lantern line: a book that exists only because DC know the hardcore will buy it.

Red Lanterns was always an odd choice for DC to publish: a comic about a bunch of psychotic angry aliens running around the universe vomiting blood on people isn't exactly a considered creative choice. It got a 10% boost in June, thanks mainly to the introduction of fan favourite Guy Gardner as the new series lead. That's over 3,000 new readers - but again it's still down compared to June 2012 (by 2%). 37,000 readers isn't to be sneezed at however; that's about what Daredevil is selling.

As for new arrival Larfleeze? It's first issue only managed to ship 36,638 copies. That's better than many other recent launches, but not by much. For a Green Lantern title it's pretty appalling. By comparison, Red Lanterns launched with more than 80,000 copies. I can't see this book sticking around.