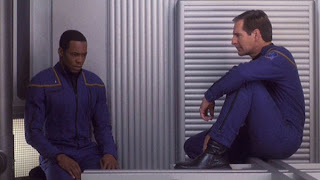 While the Enterprise makes a course diversion to observe a previously unseen phenomenon, Ensign Mayweather takes his leave from the mission to reunite with his family onboard the cargo ship Horizon. He is met with tragedy in the form of his father's death, as well as resentment from his brother Paul - who has been forced to take command of the family business on his own.

Travis Mayweather (Anthony Montgomery) has always been Enterprise's most under-utilised character, so it's great to see him finally get an episode to himself. I mean by himself quite seriously - asides from a few early scenes the entire episode takes place on the Horizon with none of the regular cast in sight. The result is a nice change of pace and tone for the series, as we get to see not only more of Montgomery and his origins, but a key piece of series history as well.

One of the core conflicts of "Horizon" is the fact that Travis quit the family business to join Starfleet, and this is used to reflect a broader trend among human beings at the time. Ten years earlier, if a human wanted to travel outside of his or her own solar system and see the galaxy, it was by necessity in the crew of a slow-haul cargo vessel like Horizon. Pay was poor, conditions were dangerous and the ships took months to make each journey. Come up to speed with Enterprise, and suddenly an adventurous human can sign up with Starfleet and get more money to fly in comparative safety on a much more advanced and speedy vessel. There's a sense of an era ending in this episode, to be replaced by the Star Trek we all know and love, and it proves to be fertile ground for story.

Anthony Montgomery rises to the challenge of having his own episode, and delivers a strong, engaging performance. Also good is Corey Mendell Parker as Paul Mayweather, the resentful older brother who never liked the choice that Travis made.

There's a token climax to this episode involving raiders attacking the Horizon, but to be honest it's the character work and background detail that makes this episode worthwhile. It's a solid, enjoyable hour of television, bringing Enterprise's second season up to 12 good episodes out of 20, or 60%.
Posted by Grant at 9:15 AM