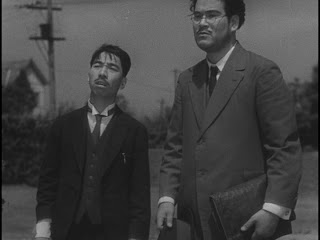 While there's a lot more to explore in terms of the history and cultural context of Japanese silent films, I figured it would be worth diving in and actually watching one. For my first viewing experience I selected Flunky, Work Hard (1931), the earliest existing film by director Mikio Naruse (or Naruse Mikio, to use the Japanese format). This short feature (it's only 28 minutes long) follows a day in the life of harried insurance salesman Okabe and his tearaway bully of a son.

This is a surprisingly modern and genuinely funny little comedy. The performances are generally naturalistic, and the humour much more sophisticated than the broad slapstick you'd normally find in a silent comedy. It also has much more developed camerawork, including smooth tracking shots, interesting shot compositions and a few experimental moments. There is a moment late in the film where Okabe discovers his unruly son has been hit by a train. His moment of sudden panic and grief at the news is represented with a sudden 20-second montage of shapes, faces and kaleidoscopic effects. The montage runs at about one shot per second, which is a much faster editing speed than you'd expect from a film made at the start of the 1930s.

What is also fascinating is how much of the film is shot out on location. Hollywood films of the period were typically bound to soundstages and studio backlots: highly controlled environments that could get directors and producers exactly the visuals they required. Here, Naruse shoots his film out on the streets. This gives the film two advantages over its American cousins. Firstly it aids in the naturalism, as it loses that staged feel that inevitable comes from shooting on-set. Secondly, and for we in the 21st century much more interestingly, it allows a look at everyday Japanese life in 1931. In the 1930s Japan was a country halfway between adopting the fashions and culture of the English-speaking world and one retaining its traditions of clothing and architecture. Half of my attention during the film was on stuff in the background, because it's just so intriguing to see.

It's difficult to contextualise this film around other Japanese silent movies, because this is the first one I've tried. It's also difficult to reconcile the unexpected naturalism of this piece with the theatrical adaptations mentioned in my previous post. My guess (and it really is a guess) is that while Western cinema started with naturalism and documentary - a side effect of a slow move towards realism post-photography - and Japanese cinema started with theatre and abstraction, in the ensuing 25 years the West found adapting the conventions of theatre to be the easiest way to develop narrative while the Japanese used the new technology to actually create something new. In effect, the two cultures swapped places in how they used the technology.
Posted by Grant at 5:48 PM